Open meeting focused on A27 and Brexit - Chichester Observer 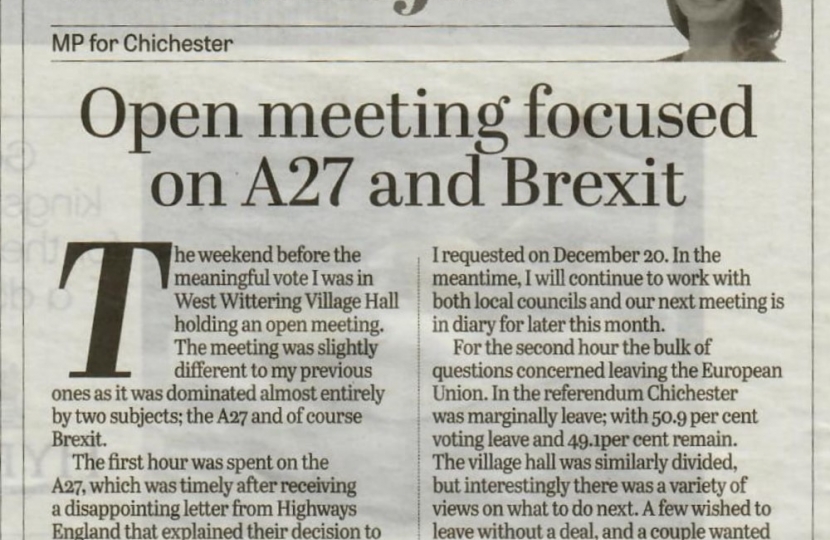 The weekend before the meaningful vote I was in West Wittering Village Hall holding an open meeting. The meeting was slightly different to my previous ones as it was dominated almost entirely by two subjects; the A27 and of course Brexit.

The first hour was spent on the A27 where I answered questions after the disappointing letter from Highways England was released a couple of hours before that explained their decision to reject the road improvement options put forward by the Build a Better A27 group and Systra.

For the past 20 months as your MP I have been engaged with the community and both councils individually and through the Build a Better A27 community workshops. In total I have had well over 30 meetings with Local Authorities and Government Ministers, and I have called on the Secretary of State publicly and privately for his backing. I have been clear from the start that my role is not to take sides, but instead fight for money when the community manages to come together around an option that Highways England agrees to be viable and financially deliverable.

Moving forward I am hoping to meet with the Secretary of State, Chris Grayling who I wrote to on the 20th December to ask for a meeting. In the mean time I will continue to work with both Local Councils with a meeting on the 25th January already in the diary.

For the second hour the bulk of questions concerned leaving the EU. In the referendum Chichester was marginally leave with 50.9% voting leave and 49.1% remain with around 78% turnout. The village hall was similarly divided, but interestingly there was a variety of views on what to do next. A few wished to leave without a deal, and a couple wanted a second referendum, but the majority, like me, wanted to see a sensible, low risk, business first Brexit.

When I was deciding how to vote on Tuesday I lent on thirty years of experience working in the car manufacturing, banking, technology and travel industries along with the many conversations I’ve had with constituents in correspondence, at open meetings, pub tours and surgery appointments. As is so often the case in politics the Brexit debate has been dominated by those who have sought to admire the problem rather than try to solve it. The Prime Minister by contrast has worked to provide us with a balanced and sensible way forward, and so I voted for her deal.

I’m around and about most Fridays and weekends and I regularly hold open meeting, pub tours and surgeries. The next date for the diary is the 15th March at The Three Moles, Selham. For more details and other dates look at my website: gilliankeegan.com/meeting-gillian.

The proposed improvement scheme for the A27 has been a contentious subject amongst constituents. I will continue to give this matter my attention and do what I can to support the objective to secure a viable scheme that will improve the congestion residents face on a daily basis.