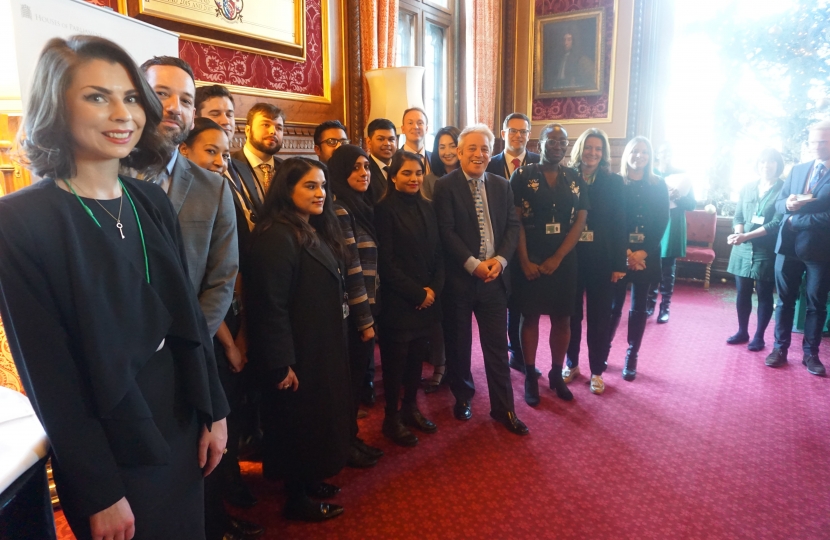 Gillian Keegan MP attended an afternoon tea at Speaker's House in Parliament to support Hillary Juma who is on the Speaker's Placement Scheme in the Chichester MP's office. The scheme is designed to widen access to Parliament by offering a nine month paid placement to people who have the skills, passion and potential to work here but don’t have access to the traditional routes in.

Gillian is one of 10 offices signed up to the scheme. The Scheme is open to people from all walks of life and every nation and region in the UK. In previous years, successful candidates have ranged from school leavers, to those in their mid-50s, and they moved to London from many different parts of the UK.

Hillary said: “It was lovely to meet the Speaker, and learn more about how the Houses of Parliament have invested insuring people from underrepresented backgrounds can have the opportunity to work in Westminster. Being part of the Speakers’ scheme has been a life changing experience, so far I have been able to assist with Gillian’s PPS role, contribute to social media content and provide research briefings. Gillian and her team have been extremely supportive to my personal development and I cannot wait for what the next 6 months have in store.”

More about the scheme

They will spend some time in different departments in the House of Commons to gain an insight into how Parliament functions. Each intern will work in 2 departments, rotating halfway through the scheme. Examples of departments they could be working in are the House of Commons Library, Governance Office and Visitor Services. The scheme also provides interns with: a chance to find out how business interacts with politics through a series of corporate away days hosted by the scheme sponsors; a chance to learn more about different career paths in politics through series of Masterclasses ; and a personal career coach to help with finding employment at the end of the scheme. The Scheme gives successful candidates a detailed understanding of how the House of Commons operates, providing them with work experience in the political sector along with the experience of working as part of a team in a small office environment. The aim is to equip participants with the skills and knowledge necessary to secure full-time employment after the scheme. Many of the interns previously on the scheme still work in the House of Commons as Parliamentary Assistants or in other departments.

The scheme was originally conceived and championed by the Rt Hon Hazel Blears MP, the scheme is now being led by Dan Jarvis MP, with additional cross-party support provided by Victoria Prentis MP. The Speaker of the House of Commons, the Rt. Hon. John Bercow MP, is a staunch supporter of the scheme.

Mr Jarvis, Parliamentary Champion for the Speaker’s Parliamentary Placement Scheme, said:
“As someone who didn't enter politics via a traditional route, I've always believed in the importance of opening up Parliament so that it looks, feels and sounds like the country it is there to serve. Extending the opportunity to work behind the scenes in the House of Commons is an important part of that process, and that is why I'm proud to be championing the Speaker's Parliamentary Scheme. It’s been a privilege to see the fantastic contribution that the Speaker’s Interns have made, and I would encourage anyone interested in gaining an experience of Parliament to apply for the Scheme in future.”

How do I apply?

The All-Party Parliamentary Group (APPG) on Youth Affairs was established in 1998 to raise the profile of issues that affect and concern young people, encourage dialogue between parliamentarians, young people and youth services, and encourage a co-ordinated and coherent approach to youth policy m

The tiered system to be introduced from 2 December: