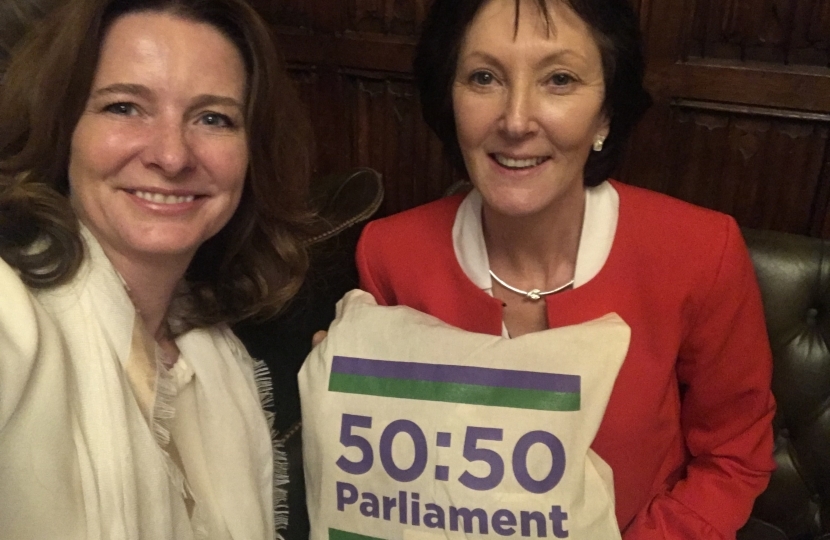 “Embarking on any new path is daunting and the journey can be lonely so you need support. 50:50 were vital, offering networking events and inspirational speakers”-

Gillian Keegan was elected as MP for Chichester (the first woman to do so) in the 2017 general election.  Since her election Gillian has championed getting more Women into Parliament and senior leadership roles.  Along with Jess Phillips MP she is the Co-Chair for the Women and Work APPG (All Party Parliamentary Group).

This month we asked Gillian 10 questions about her experience as a woman in politics.

We lived in a Yorkshire mining village during the first miners strike so I was aware of the tension as it divided the village, plus my grandad was a miner so I got to hear his views.

Somebody literally “asked me to stand” in 2014. Politics wasn’t a world I knew very well and I hadn’t thought about it as a career. There is a big difference between having political views and deciding you want to stand. After working for 30 years in business I was looking for a change but it was a random meeting with Baroness Anne Jenkin who set up Women2Win which set me on this life changing path. Politics makes a great second career!

Embarking on any new path is daunting and the journey can be lonely so you need support. 50:50 were vital, offering networking events and inspirational speakers all of whom were happy to answer any questions and to encourage those thinking of standing to go for it.

4. What do you hope to achieve in Parliament?

Coming from a working class background and attending a failing comprehensive school in Merseyside, I greatly appreciated the opportunity to do an apprenticeship at the age of 16. As the only degree level apprentice in the House of Commons I’m a huge champion of high quality apprenticeships and would like to ensure they are available to all young people who want to follow this route into the workplace.  It is vital that all young people get the chance to get on and develop the skills they need to succeed in life. There is inequality across our country and I would like to ensure this is reduced and education and decent career options are the best way to do this in my opinion.

Everything is hard about running for election. It’s hard work day after day, unpaid and you have no idea whether you will ever actually get elected so it is high risk. You have to feel comfortable discussing politics with somebody that has a different view to you. To some extent you become a public figure so will also attract abuse either online or even on your posters. You have to get used to seeing your face being drawn on.

Being able to bring another voice, another view, another set of experiences to discussions and policy development. Diversity is key to good decision making and good policies being developed. There is also a lot of support from other women MPs across the parties and women political journalists.

To ensure that issues which effect women and they care about are at the top of the political agenda. I also think that women often have a different style to men so this can also positively impact the quality of debate.

Getting elected, as it is a random process. Unfortunately this Parliament has been dominated by Brexit but I do hope we manage to move on from this to developing our vital public services to work well for the 21st century.

There is a lot of support so reach out straight away to 50:50 Parliament and each party has a support group for women to help navigate their way around the political maze. The Conservative party has a brilliant group called Women2Win which were invaluable in helping me develop the skills I needed – whether it was in the area of public speaking or policy knowledge.

I was surrounded by strong women when I was growing up both my grandmothers and my mother instilled me with confidence which is the greatest gift you can give any child.  I was also inspired by my mother in law, Marie Jennings MBE who grew up in India, left school at 14 and had to make her own way in the world. She went on to write several books, produce television programmes, found and run a successful public affairs business, champion women’s rights and financial independence. She was named Woman of the Year in 1969.

To find out more about the 50:50 Parliament read more on: www.5050Parliament.co.uk