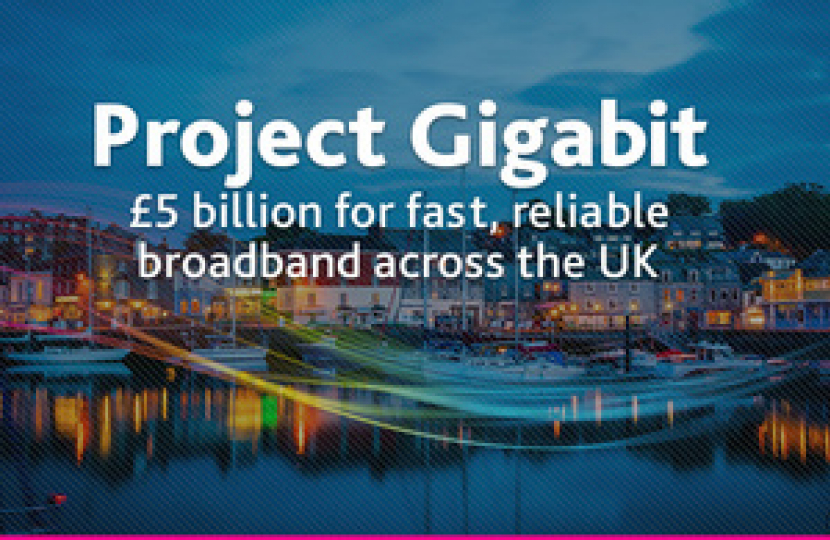 2.2 million homes and businesses in England set to get top-of-the-range connections

Millions of people in rural England will get access to the fastest broadband speeds on the market as part of a £5 billion plan to level up internet access across the UK.

The government’s Project Gigabit fund to upgrade digital infrastructure in hard-to-reach areas will accelerate the country’s recovery from covid, fire up high-growth sectors such as tech and the creative industries, put an end to families battling for bandwidth and bring the speed and reliability people need to start and run businesses.

New details published today reveal up to 1,850,000 additional premises across 26 English counties, including in West Sussex, will get access to gigabit speed internet of 1,000 megabits per second - enough to download a HD movie in less than 30 seconds and lay the foundations for next-generation tech such as 8K-quality video streaming. In West Sussex the scheme is expected to provide this upgrade to over 67,000 homes.

It brings the current total number of premises in scope for government-funded coverage to 2.2 million, with more still to be announced over the coming months across England, Scotland, Wales and Northern Ireland.

This is in addition to the tens of millions of premises that broadband firms are rapidly connecting through their commercial rollout, from one in ten households in 2019 to more than two in five today. The UK is also on track for the fastest rollout in Europe this year and for 60 per cent of all households to have access to gigabit speeds by the end of this year.

The government is also on track to hit its target of achieving at least 85 per cent gigabit-capable UK coverage by 2025, and ministers are ready to go as fast as broadband companies can manage.

Project Gigabit is our national mission to level up rural areas by giving them the fastest internet speeds on the market.

Millions more rural homes and businesses will now be lifted out of the digital slow lane thanks to our mammoth £5 billion investment and one the quickest rollouts in Europe.

This broadband revolution will create jobs, power up businesses and allow everyone to access vital services at lightning fast speed, helping us build back better from the pandemic.

Almost half a million (480,000) premises in Shropshire, Norfolk, Suffolk, Worcestershire, Hampshire and the Isle of Wight will be among the first to benefit followed by counties including Derbyshire, Wiltshire, Gloucestershire, Lancashire, Surrey, Leicestershire, Warwickshire, Nottinghamshire, Hertfordshire, Staffordshire, Lincolnshire and Yorkshire.

The news follows a raft of Project Gigabit updates benefiting all four UK nations, including £24 million to roll out gigabit broadband in ten local authority areas in Northern Ireland, 234,000 homes and businesses in Wales being confirmed as in scope to receive upgrades through the programme, and £4.5 million to help thousands in central Scotland get next-generation connections.

On top of this, today it is also being confirmed that the Scottish and Welsh governments and 15 English councils have made at least an extra £26 million available in top-ups to the UK Government’s Gigabit Broadband Voucher Scheme. The scheme, which is available nationwide, covers the costs of a gigabit connection in areas that are particularly difficult to reach, and the top-ups boost the financial help available.

There are 47,000 homes and businesses now plugged in to gigabit broadband as a result of the scheme, with a further 38,000 in the pipeline and millions of pounds in vouchers still available for people to claim.

Under the record-breaking fund, a cornerstone of the Prime Minister’s plan to build back better, the government is investing in areas left behind by the industry’s roll out plans due to the expense and lack of a commercial incentive to connect them to gigabit capable networks.

The first Project Gigabit contracts announced in March are expected to commence from May next year, with spades hitting the ground soon afterwards. This includes 349,000 premises in Essex, Dorset, Cumbria, Cambridgeshire, Northumberland, Durham, Tyneside, Teesside and Cornwall.

Many more areas are due for upgrades under the scheme and will be announced later this year, with hundreds of thousands more homes and businesses set to benefit.

The pandemic has seen more services offered online and more businesses and consumers wanting to use online services, in particular from home.

This announcement enabling over 2m homes to have the fastest internet services will make a real difference to those businesses and consumers wanting to maximise the benefits of digital services.

Gillian has been working to improve digital connectivity throughout the area.