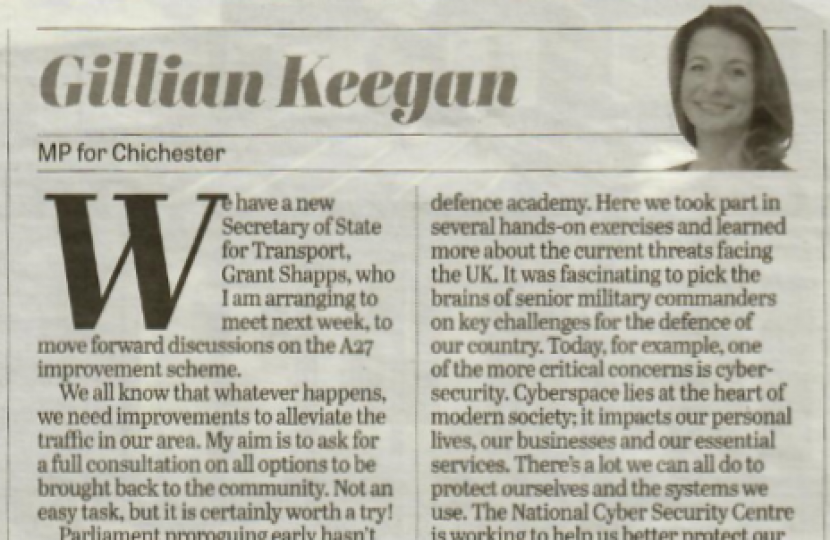 We have a new Secretary of State for Transport, Grant Shapps, who I am arranging to meet next week, to move forward discussions on the A27 improvement scheme. We all know that whatever happens, we need improvements to alleviate the traffic in our area. My aim is to ask for a full consultation on all options to be brought back to the community. Not an easy task, but it is certainly worth a try!

Parliament proroguing early hasn’t changed my plans as I was signed up to the Parliamentary Armed Forces Scheme. The scheme is designed to help MPs understand more about the Armed Forces; how they operate and what their key defence concerns are. Chichester is steeped in military history, having been home to RAF Tangmere, famous for its role in the Battle of Britain. Today we are also home to Thorney Island barracks and obviously with Portsmouth just down the coast many people in Chichester are serving sailors.

Both my Grandfather’s served at sea in the Second World War, one on the arctic convoys with the Merchant Navy and the other in the Royal Navy so I chose the Naval branch of the scheme.

I spent three days last week in Shrivenham, the world-renowned defence academy. Here we took part in several hands-on exercises and learned more about the current threats facing the UK. It was fascinating to pick the brains of senior military commanders on key challenges for the defence of our country. Today, for example, one of the more critical concerns is cyber-security. Cyberspace lies at the heart of modern society; it impacts our personal lives, our businesses and our essential services. There’s a lot we can all do to protect ourselves and the systems we use. The National Cyber Security Centre is working to help us better protect our computers.

The Armed Forces will receive a further £2.2billion to ensure they continue to modernise and meet these ever-changing threats. Whilst at Shrivenham, we learned about the Prime Minister’s commitment to buy at least five British Type 31 warships. The programme will create 2,500 jobs across the UK, including over 150 new technical apprenticeships. The Royal Navy’s first Type 31 is due to be in the water by 2023. These ships are fast, agile and versatile and so will be perfect for a modern Navy tackling issues such as piracy, drugs and people trafficking, humanitarian missions, and of course protecting our seas to ensure trade flows, which is vital as 90% of global trade is shipped by sea.