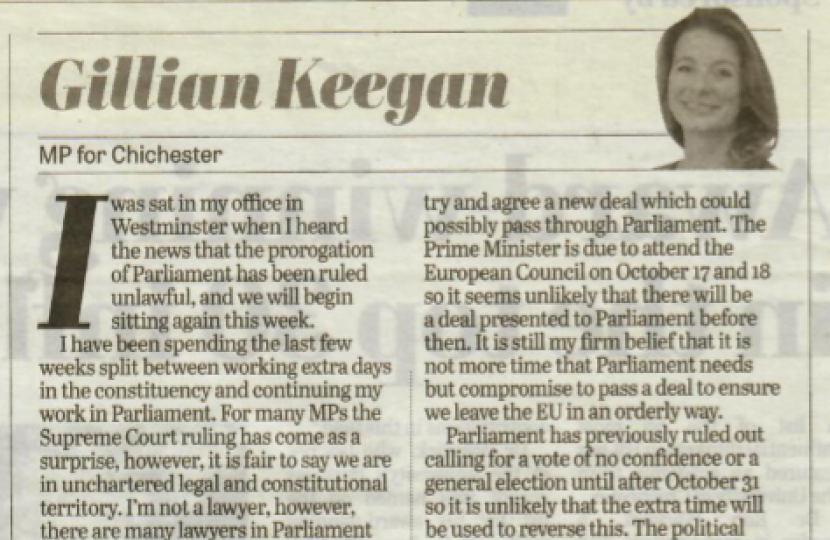 I was sat in my office in Westminster when I heard the news that the prorogation of Parliament has been ruled unlawful, and we will begin sitting again this week. I have been spending the last few weeks split between working extra days in the constituency and continuing my work in Parliament. For many MPs the Supreme Court ruling has come as a surprise, however, it is fair to say we are in unchartered legal and constitutional territory. I’m not a lawyer, however, there are many lawyers in Parliament and I’m sure they will be arguing the merits and implications of this case for some considerable time.

From a practical viewpoint prorogation meant that neither the House of Commons nor the House of Lords could meet, debate and pass legislation. In general, bills which have not completed all stages are lost and must start again in the next Parliament.  As Parliament is no longer prorogued there may be some legislation we can usefully pass which was partway through such as the new domestic abuse legislation and the bill to put in place rules to facilitate some online court hearings.

However, I’m not sure we will move much further forward with the big issue of the day which is Brexit. The negotiating teams have been attending meetings in Europe and Ireland to try and agree a new deal which could possibly pass through Parliament. The Prime Minister is due to attend the European Council on the 17th and 18th October so it seems unlikely that there will be a deal presented to Parliament before then. However, it is still my firm belief that it is not more time that Parliament needs but more compromise to pass a deal to ensure we leave the EU in an orderly way.

Parliament has previously ruled out calling for a vote of no confidence or a General Election until after 31st October so it is unlikely that the extra time will be used to reverse this. The political parties are usually on a break to hold their annual conferences during this time, the opposition parties have mostly held their conferences in the past few weeks however the Conservative party was due to hold their conference Sunday through to Wednesday next week. It is unclear whether this will go ahead or if MPs and Ministers will be permitted to attend.

It is clear that our Parliament and unwritten constitution are being put under considerable strain by Brexit, however, I still maintain that the core difficulty is trying to implement Brexit in a hung Parliament. A hung Parliament in which many parties do not accept the result of the referendum and want to reverse the decision in some way. I fear it is inevitable that we are heading for a General Election in the not too distant future as our system of Government only really works with a group having a parliamentary majority.

The big news in Parliament last week was the Government reshuffle. Politics is a tough business and there are unfortunately always winners and losers. I was privileged to get a call and be offered a ministerial position in the Department for Education.