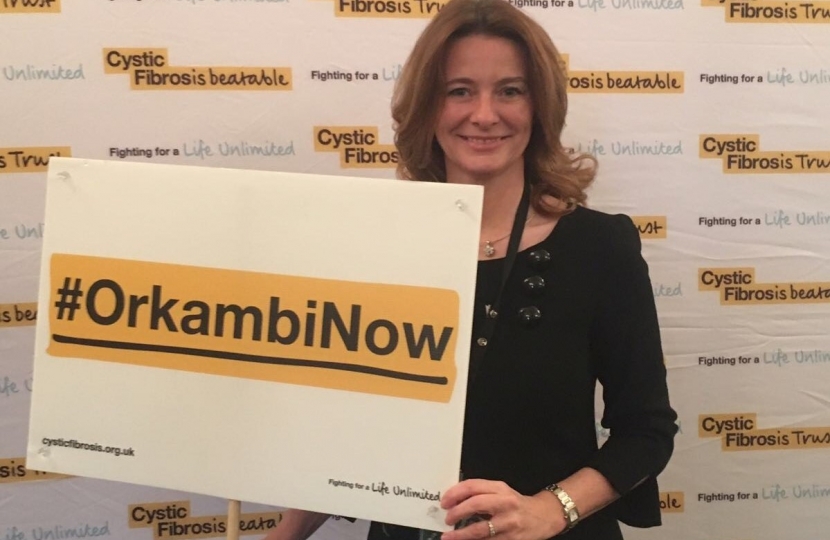 On Thursday 24th October, the Secretary of State for Health and Social Care, Matt Hancock, announced that the NHS agreed a deal with the drugs manufacturer Vertex after years of negotiation. The deal ensures life-improving and prolonging drugs will be available on the NHS. Local MP, Gillian Keegan, has been campaigning cross-party for the cystic fibrosis drug Orkambi to be made available on the NHS since 2017. The MP has raised the profile of the issue through cross-party letters, direct representation and speeches in Parliament.

Cystic fibrosis is a genetic condition affecting more than 8,200 people in England. Currently, there is no cure and half of those who suffer from the condition die before their 31st birthday. That is why drugs like Orkambi have been a priority for MPs like Gillian as it can slow lung decline by 42% and improve quality of life with reduced hospitalisation by 61%.

Gillian’s involvement in the campaign stemmed from her constituents who asked her for support. The MP also met Jack last year at St Richard’s Hospital with his mother Charlotte Munn. Jack was only 14 at the time and once again found himself in hospital rather than at school or playing with his friends.

The two-year agreement with Vertex is expected to benefit over 4,000 people, many of whom are children like Jack.

On hearing the announcement Jack’s mother, Charlotte Munn, said, “Jack and I are so pleased to hear that the deal has been done so a large number of Cystic Fibrosis patients everywhere will finally be able to access Vertex drugs.”

“I found great comfort in knowing that Gillian was behind us during this campaign and for the first time in many years I feel like Jack may have a chance to live his life to its fullest. This is proof that the Government can make a huge difference in peoples lives and bring a level of personal support at the same time.”

Gillian Keegan said, “This has been a long-fought campaign to make this drug available to those who need it. The NHS has, after years of effort, managed to negotiate with Vertex to ensure patients get the medication they need at a fair price for the taxpayer.”

“The best bit of my job is being able to make my constituents lives better in whatever way I can, and I know that this announcement will be transformative to the lives of so many families up and down the country. Now I am a Parliamentary Private Secretary to Matt Hancock, I will continue to champion local health issues that matter to you from within the Department.”

Secretary of State Matt Hancock said, “Huge thanks to the many campaigners who have worked so hard, and to Vertex & the NHS.”

"I know personally how important this is - and I've met many sufferers. Things like this are the reason I do this job.”

"For those who say the system doesn't work, this proves them wrong. We can get lifesaving drugs at a fair price, thanks to NICE and the NHS. We should all reject calls to undermine that."

For more details on Cystic fibrosis go online to cysticfibrosis.org.uk

Campaign for medication ends in success.

On Thursday 24th October, the Secretary of State for Health and Social Care, Matt Hancock, announced that the NHS agreed a deal with the drugs manufacturer Vertex after years of negotiation. The deal ensures life-improving and prolonging drugs will be available on the NHS.

Gillian signs letter to the PM on Orkambi CF drug

The Prime Minister, Theresa May, a year ago today, said she wanted a “speedy resolution”* in the  ongoing negotiations between NHS England, NICE and drug manufacturer Vertex so that cystic fibrosis patients could have access to Orkambi** and Symkevi***.

Gillian Keegan MP is supporting calls from the Cystic Fibrosis Trust to urge NICE, NHS England and the pharmaceutical company Vertex to reach a deal on the cost of life transforming cystic fibrosis drugs and make them available on the NHS without delay.