Response from the Environment Agency

Below is the response from James Humphrys, Area Director at the Environment Agency, to Gillian's enquiries.

Thank you for your email of 27 October 2020 regarding the concerns of your constituents about the River Ems.

The work we have carried out over many years has sought to protect and improve such valuable habitats, and the Government’s 25 Year Environment Plan enshrines our collective ambition to leave the environment in a better state than we found it. We are embedding the broad concepts of the 25 year plan at a local scale, working with local communities and councils.

Friends of the Ems (FOTE) approached us in the summer of 2020 and we have attended meetings to listen to their concerns and to discuss actions to improve the River Ems in the short, medium and long term.

The attached document responds to the specific questions in your email, and I hope it helps. (see below)

What impact assessment has the EA made on the rate of abstraction at the site, in ecological and biodiversity terms?

Where concerns are raised about the impact of public water supply abstractions, they are generally investigated as part of the Water Industry National Environment Programme which is set for a five year period. During the period 2010 – 2015, Portsmouth Water were tasked with investigating the impact of their abstractions on the River Ems. This work included collating and reviewing our ecological and hydrological data as well as collecting new data for the study. A comprehensive report was produced in 2013 which Portsmouth Water has offered to share with FOTE.

The conclusion of that work was that the abstractions were affecting the flow and ecology of the River Ems and so options were considered and a programme of measures was proposed to address that. Although reductions or cessation of abstraction were considered, the most cost effective solution was to modify the augmentation scheme, carry out habitat improvements and resolve obstacles to fish migration.

To implement this scheme, both abstraction licences were varied in 2016 to incorporate the proposed new augmentation scheme which represented an increase in flows discharged to the river, over a longer period and over a greater length of river than the previous scheme. Some minor administrative changes were made to the licences in 2017 which did not alter what Portsmouth Water are permitted to abstract.

See below for an analysis of our current assessment of the River Ems.

How often are the direct impacts of abstraction rates assessed and re-evaluated?

The River Basin Management Plan (RBMP) is updated every six years and is our main process for reporting on our routine monitoring which defines the state of the environment and also reporting on progress with the actions that we have previously committed to.  The last report was published in 2015 and the next plan is due in 2021.

We have a key role in implementing the Water Framework Directives (WFD) through the river basin management planning process. Under WFD, our objective is to get all waterbodies to ‘Good Ecological Status/Potential’ by 2027 at the latest.

Our focus on protecting and improving the River Ems is an ongoing process informed by evidence. We use evidence from our monitoring data and partners to plan and deliver the best environmental outcomes. In order to understand the pressures on the River Ems and identify progress, we benchmark and review the health of the river, which we conduct through classifications (under WFD) of the river’s ecology, chemistry and hydro morphology.

This is part of an ongoing process that follows our standard ‘Plan, Do, Check, Act’ cycle. Under this cycle we review the current evidence available, assess the accuracy of our classification failures, evaluate if our river monitoring is still fit for purpose, and as a result we tie all this evidence together to examine if the correct pressures are identified that are causing the Ems to fail to achieve Good Status under WFD. 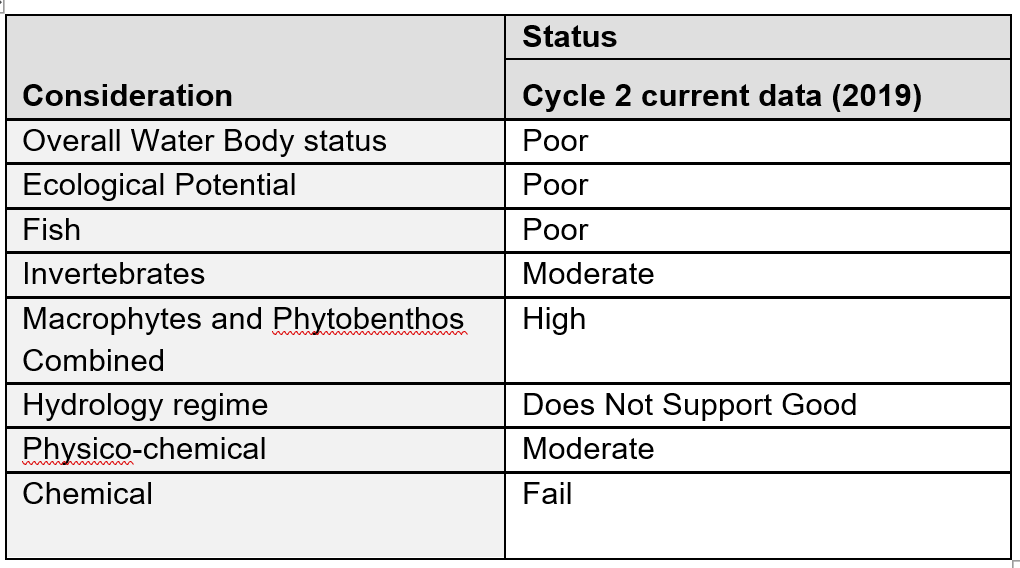 Table 1: Table above shows the 2019 WFD waterbody status for the River Ems

Our current evidence suggests that there are a series of pressures facing the Ems, as is reflected by the most recent WFD classification results shown in Table 1. Fish and Invertebrate elements are currently failing which has been attributed to physical modifications, barrier to fish migration and poor habitat, all of which are exacerbated by low flows in the River. Table 1 shows that the Physico-chemical status is failing which we suspect is attributed to a suspected pollution problem in the Lumley Road area. We have identified that the river’s hydrological regime and chemical status is also failing under WFD. Information on our water bodies (such as the River Ems) is also available externally to stakeholders on our Catchment Data Explorer (https://environment.data.gov.uk/catchment-planning/).

A network of monitoring sites and modelling is used to establish the status of the River Ems in terms of the river’s ecology, chemistry and hydro morphology (as shown in Table 1). This includes water quality sampling, fish and invertebrate surveys. Subject to availability of funding, we hope to sample for invertebrates from two sites on the River Ems from 2021 onwards. This would include the original site (Downstream Westbourne Augmentation), and another site called Brook Meadows (SU 75072 05950) which is above the A259 on the other braided arm of the Ems. These sites would be collected every year (spring and autumn) for at least the next five years. This sampling will enable a new and reliable WFD classification for invertebrates, as well as assessing any improvements from habitat restoration work and the ongoing impact from flows. In regards to water quality, We are looking to deploy a Sondes instrument to continuously monitor the river quality by Lumley Road to help pinpoint the cause of the ammonia spikes (if funding allows), which will also provide clarity on the dissolved oxygen failure. We also have plans to continue fish monitoring, which will be guided by future restoration projects.

How are abstraction allowances calculated?

The policies that we now use for issuing abstraction licences and setting the quantities that will be allowed are clearly set out in our Abstraction Licensing Strategy for the Arun & Western Streams.

A copy of this strategy is readily available to external stakeholders via the GOV.UK website, which was last updated in April 2019. The document can be accessed through the following link: https://www.gov.uk/government/publications/arun-and-western-streams-catchment-abstraction-licensing-strategy

Portsmouth Water has two abstraction licences in the Ems catchment which were originally issued as Licences of Right in the 1960s. Licences issued at that time did not undergo the same level of scrutiny that is now applied to applications for abstraction

What can be done to reduce the quantities abstracted from the site?

The ecological condition of the River Ems is influenced by many factors which include abstraction, but other factors can play an important role too and so the River Basin Management Plan (RBMP) sets out how we will take action on all factors affecting the ecology of the river.

As a result of the actions identified in the 2015 plan, we have worked with a number of partners to deliver environmental objectives on the River Ems, such as Portsmouth Water, the Arun & Rother Rivers Trust, the Wild Trout Trust, South Downs National Park as well as local landowners. This includes projects designed to improve habitat and increase fish passage opportunities. For instance, previous work carried out with our partners on the Ems helped to implement habitat creation schemes and removal of weirs in order to create a more naturalised channel downstream of Westbourne. These measures were all intended to improve the habitat of the river and enhance conditions for fish, invertebrates and other plant/animal species.

The updated RBMP will be published in 2021 and will give clear direction on the measures that can be taken to improve the status of the River Ems.

Our National Framework for Water Resources, published earlier this year, sets out our ambition for improving the environment and has a particular focus on protecting chalk streams. To embed that ambition at a local level, we are working hard to influence the plans being developed by Water Resources South East and Portsmouth Water’s Water Resource Management Plan to ensure that sustainable water resources are developed to replace abstractions which are affecting the environment.

We are keen to continue working with Portsmouth Water, FOTE and others to understand local concerns and to explore options to improve conditions in the Ems.  This includes looking at ways in which abstraction can be reduced but will also include looking at other measures which can be implemented.

Is there any further information I need to be aware of regarding this site?

There is no further information to provide at this stage.

Gillian is working with local councillors, Cllr. Mike Magill, and Cllr. Roy Briscoe, from WSCC and CDC respectively, as well as, the community to reduce the rate of water abstraction from the River Ems, that runs through her constituency.