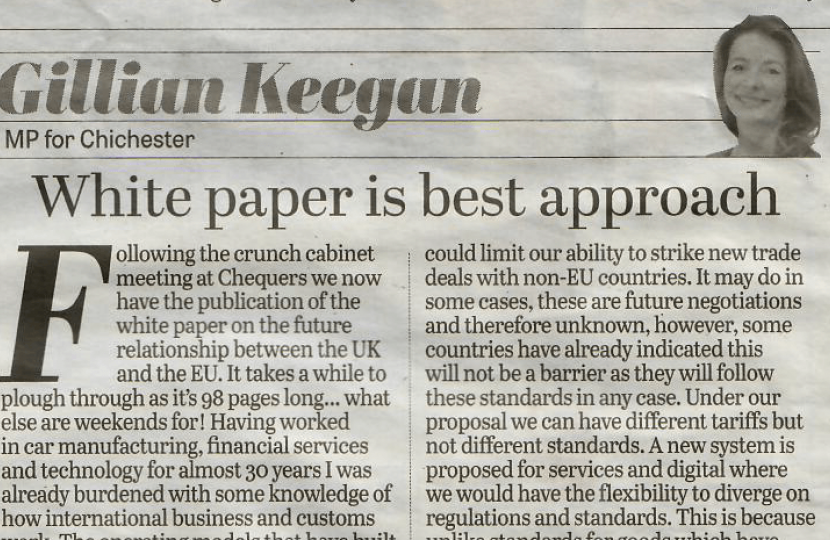 Following the crunch Cabinet meeting at Chequers we now have the publication of the white paper on the future relationship between the UK and the EU. It takes a while to plough through as its 98 pages long... what else are weekends for! Having worked in car manufacturing, financial services and technology for almost thirty years I was already burdened with some knowledge of how international business and customs work. The operating models that have built up over the last 40 plus years are complex, integrated and ultimately have been key to making our manufacturing industry more successful which has been good for jobs. I worked in a car factory when the just-in-time system was being introduced during the 1980’s and 90’s. It transformed the UK car industry removing the risk and cost of holding stocks of thousands of widgets. Today it is not unusual for a car part to cross the channel several times before it is assembled into a finished car and shipped to the European market.

It has taken time to reach a position on Brexit and that is because there are many views on what may work for businesses, the impact on the Irish border, what the EU may or may not agree to and what the British people voted for. The white paper represents a compromise. It seeks to prioritise ending free movement of people and ceasing to pay large membership fees to the European Union. However, to enable frictionless trade to continue either side of the border its proposed we keep common standards for goods and agricultural food. Some fear this could limit our ability to strike new trade deals with non-EU countries. It may do in some cases, these are future negotiations and therefore unknown, however, some countries have already indicated this will not be a barrier as they will follow these standards in any case. Under our proposal we can have different tariffs but not different standards.

A new system is proposed for services and digital where we would have the flexibility to diverge on regulations and standards. This is because unlike standards for goods which have been stable for the last thirty years there is a lot of change anticipated in the world of services and digital and we don’t want to be tied to the EU’s future regulation, a so-called vassal state. This makes sense to me, consider cyber security, fake news, crypto currencies, artificial intelligence and a whole new world of innovation where the rule books have barely been considered. We would benefit from being agile not tied to rules from the EU.

Some people are not happy with the compromise. I understand, the referendum was divisive, but I can’t help thinking that if we had been offered a deal three years ago that ended free movement of people, stopped payments to the EU, continued frictionless trade, with no border in Northern Ireland and regained control of our fishing and farming policies we would have readily agreed. Indeed, we would have bitten their hand off. Unravelling a forty-three-year-old trading relationship is difficult, this white paper is the best approach to begin the process of establishing a new trading relationship with the EU.