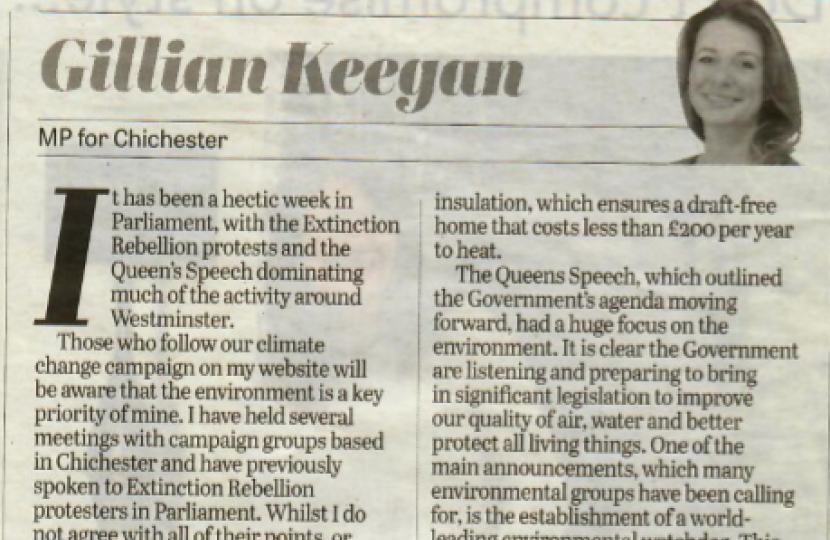 It has been a hectic week in Parliament, with the Extinction Rebellion protests and the Queen’s Speech dominating much of the activity around Westminster.

Those who follow our climate change campaign on my website will be aware that the environment is a key priority of mine. I have held several meetings with campaign groups based in Chichester and have previously spoken to Extinction Rebellion protesters in Parliament. Whilst I do not agree with all of their points, or the level of disruption the protests have caused, I have been working with environmental campaigners to see what we can all do to make a difference.

As part of this ongoing campaign, I recently put several questions to ministers in areas including incentives to make businesses more sustainable, environmental conditions on UK Aid and the introduction of VAT on aviation fuel. Another area I have looked into is EcoHomes and building net carbon neutral homes. Last week I visited a Passivhaus in Emsworth to learn more about how the latest in building standards can reduce our day to day carbon footprint. Overall I was very impressed with the simplicity of the design and success features such as triple glazing combined with double insulation, which ensures a draft free home that costs less than £200 per year to heat.

The Queens Speech, which outlined the Government's agenda moving forward, had a huge focus on the environment. It is clear the Government are listening and preparing to bring in significant legislation to improve our quality of air, water and better protect all living things. One of the main announcements, which many environmental groups have been calling for, is the establishment of a world-leading environmental watchdog. This new body will be able to keep us on track to meet the Governments landmark Net-Zero by 2050 commitment.

There is a huge amount of support for more to be done to protect our environment in the House of Commons. The Conservative Environment Network met this week and my colleagues and I discussed the positive steps taken by the Government and where we still need to push for more action.

Moving forward, I am expecting some key ‘green’ announcements in the budget so we can really move up a gear ahead of hosting the UN Climate Change Summit, COP26 in 2020. Where we will share best practice and encourage countries around the world to join us in our goal to be Net-Zero by 2050 or sooner.