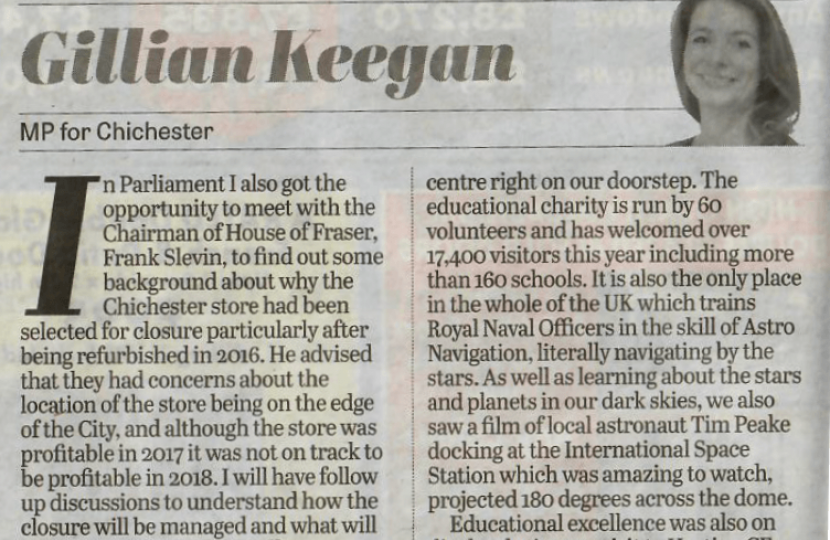 In Parliament I got the opportunity to meet with the Chairman of House of Fraser, Frank Slevin, to find out some background about why the Chichester store had been selected for closure particularly after being refurbished in 2016. He advised that they had concerns about the location of the store being on the edge of the City, and although the store was profitable in 2017 it was not on track to be profitable in 2018. I will have follow up discussions to understand how the closure will be managed and what will be done to support the staff.

As the World Cup kicks off I have been inspired to join the Women’s Parliamentary football team. I haven’t played before but as I’m called Keegan and I’m originally from Liverpool I’m hoping it’s in the genes! You don’t necessarily need experience to be thrown in the deep end in Parliament, which is how I found myself in the Soccer Aid tournament where MPs play journalists. It was great fun and was for a good cause raising money for UNICEF, which is a charity which works around the world to help children in danger. I also got a chance to meet the real Soccer Aid teams captained by Robbie Williams and Usain Bolt as they were invited to 10 Downing Street. It was quite a surreal experience to find myself talking football tips with Mo Farrer and Yaya Touré and one I won’t forget in a hurry.

Another out of this world experience was my visit to the Chichester Planetarium. One of only 12 fixed planetaria in the UK, we are very fortunate to have this Science education centre right on our doorstep. The educational charity is run by 60 volunteers and has welcomed over 17,400 visitors this year including more than 160 schools. It is also the only place in the whole of the UK which trains Royal Naval Officers in the skill of Astro Navigation, literally navigating by the stars. As well as learning about the stars and planets in our dark skies, we also saw a film of local astronaut Tim Peake docking at the International Space Station which was amazing to watch, projected 180 degrees across the dome.

Educational excellence was also on display during my visit to Harting CE Primary School. The year six children had been preparing for my visit by watching Parliament on TV. They mocked up the green benches of the House of Commons in the assembly hall and played the role of MPs from all parties. They promoted me to Prime Minister for an hour and cross questioned me on a wide range of topics, with plenty of bobbing to ask questions and cries of “hear hear” when they agreed with the answers. I have visited many schools across the constituency but this was by far the most entertaining question and answer session to date. We even had a Madame Speaker who, taking a leaf out of John Bercow’s book, reminded noisy MPs that they were not to behave as though they were at a Chimpanzee’s Tea Party. The whole thing was brilliantly done and I just about managed to survive their tough questions about taxation policy, environmental policy, road maintenance and investment and animal welfare, which were seriously impressive for 10 and 11 year olds.