Solution is needed to solve A27 congestion - Chichester Observer 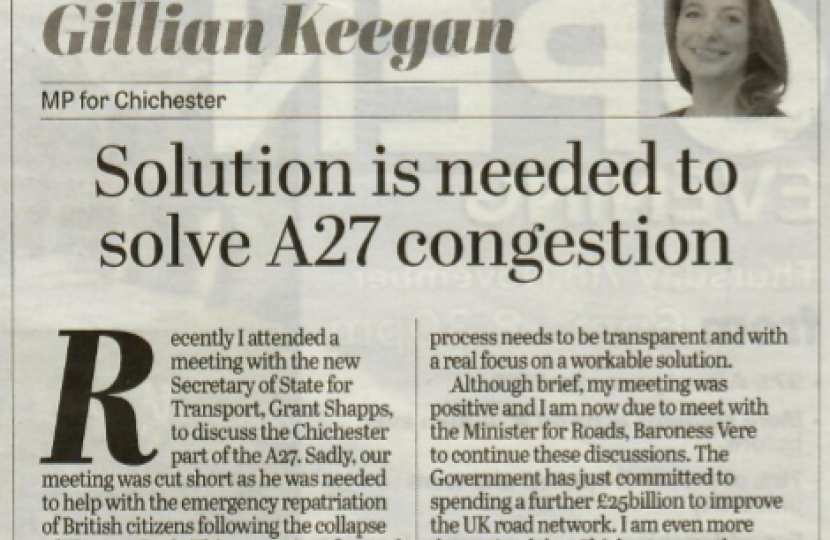 Recently I attended a meeting with the new Secretary of State for Transport, Grant Shapps, to discuss the Chichester part of the A27. Sadly, our meeting was cut short as he was needed to help with the emergency repatriation of British citizens following the collapse of Thomas Cook. This was quite a feat and turned out to be the biggest repatriation event in our peacetime history.

The aim of my meeting was to see if I could get the process moving again as nothing has happened since the Build a Better A27 (BaBA27) group’s suggestions were rejected by Highways England as either unaffordable or unviable. As a community, we know that we need a solution to the current congestion which will only worsen over time.

I am focused on trying to secure some money from the Department for Transport’s RIS 2 budget to rerun the original Highways England consultation – with all the options back on the table. Unlike in previous consultations the process needs to be transparent and with a real focus on a workable solution.

Although brief, my meeting was positive and I am now due to meet with the Minister for Roads, Baroness Vere to continue these discussions. Many of you will have also seen that the Government just committed to spending a further £25billion to improve the UK road network. I am even more determined that Chichester gets the investment it needs to upgrade the A27.

Another major announcement recently came from the Department for Health where they announced 40 new hospitals as part of a massive refurbishment project. There is also a focus on improving technology with an investment of £200 million for state-of-the-art MRI, CT and breast cancer screening machine across 80 Trusts. I’m delighted to be joining the team at the Department of Health and Social Care as the Parliamentary Private Secretary to Matt Hancock, Secretary of State. There is a lot to learn, but I am hoping to progress some of the campaigns I have been working on in Parliament to date, such as investing in professionalising the social care workforce and ensuring we have radiotherapy provision at St Richard’s Hospital.