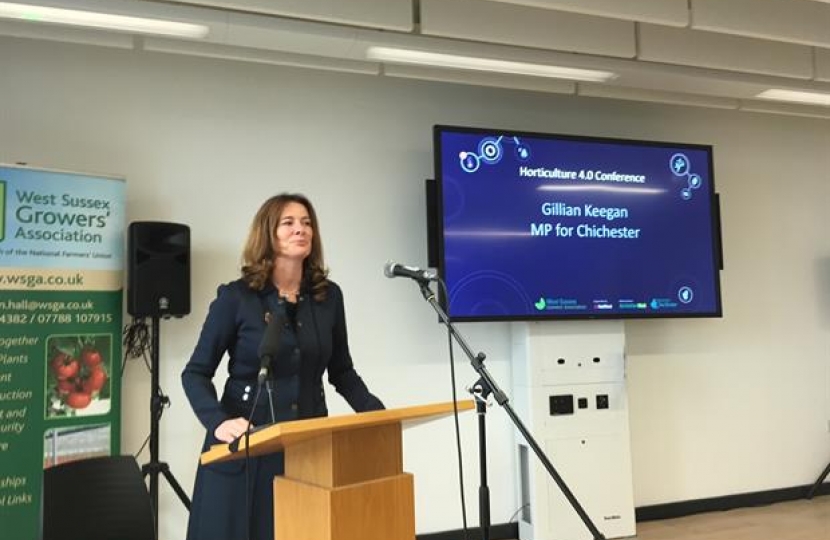 Chichester MP Gillian Keegan has indicated the 2,500 worker SAWs scheme could be a trial for a wider plan, while NFU horticulture chairman Ali Capper has said with robotics still several years away, more seasonal workers are needed urgently now and post-Brexit.

Both were speaking at the West Sussex Growers Association Horticulture 4.0 conference at the Univeristy of Chichester which looked at the role of automation and robotics in horticulture.

Speakers told a packed audience of production professionals that change was rapid as the industry adapts to worker shortages by looking at mechanisation.

Keynote speaker Keegan said: "Access to labour - there have been some difficulties this year, mostly due to exchange rates. We need a long-term future immigation policy."

She said the 2,500 pilot Seasonal Workers (SAWS) scheme must be grown. As the previous SAWS was 20,000-30,000 "we do have previous knowledge of what the what the requirements are".

Picking 15 to 19kg an hour was "nothing like unskilled labour", as this year's MAC enquiry, which dismissed calls for more unskilled labour immigration, said it was when recommending no concessions for unskilled labour for the industry. "It's highly skilled but difficult to define". Delays at the border would be a "disaster".

Keegan said she was impressed by West Sussex growers' moves into LEDs and hydroponics and other technology. She said workers were needed "pretty much all the year" now.

She said the Government hoped to have a Brexit agreement before Christmas, but the 5% that needed to be agreed was "critical", especially the "sensitive" Northern Ireland border issue.

The best way for agriculture is the common rule book with free trade - "a business-friendly, low risk Brexit" but she agreed some of her colleagues are not fully behind the Prime Minister's Chequers plan, though "post-Brexit is a huge opportunity".

However, while Keegan could say SAWS should grow, the view at the Home Office is more important, said the NFU.

However, labour provider HOPS say they have cut waiting lists to far less than the NFU figure after "transferring sign-up costs from workers to growers, making UK jobs more attractive to workers. Concordia has followed suit for 2019.

Both HOPS and Concordia have applied to run the new SAWS scheme.

Capper said defining 'skills' such as picking, thinning and husbandry in horticulture was difficult. She is "fed up" that horticulture is branded a "low productivity sector".

Meanwhile Neame Lea's Andrew Fuller gave examples of how the nursery had cut staffing by 80% on cut flower tulip lines through computer-controlled grading. There are 12m tulips now produced with a capacity of 60m and lilies starting this year.

Dave Thompson of Ricardo engineers talked about the automated 'Factory 4.0' where actions that do not add value are eliminated by adding technology such as digital screens to advise workers to work accurately. He said smart factory was about AI, cognitive computing and 'smart co-acts', and followed steam, electricification and IT as industry revolutions.