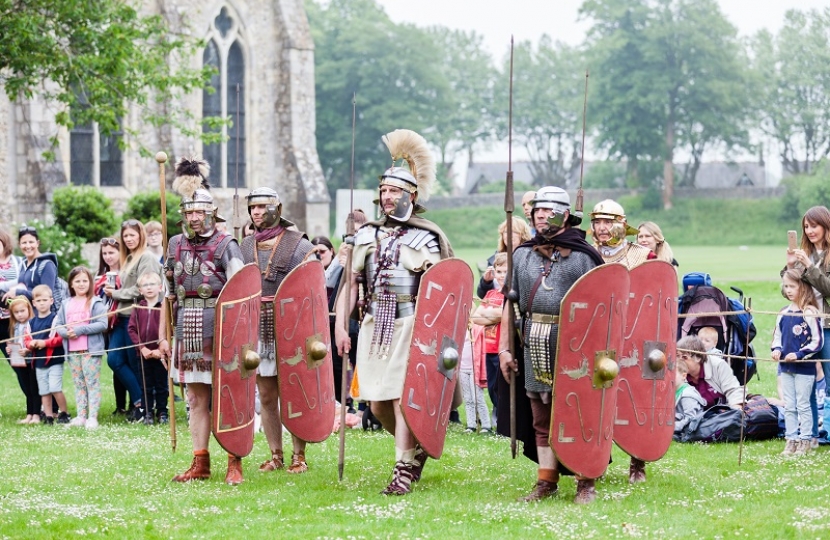 The award winning Chichester Roman Week is back this May half term for its fourth year and is set to be bigger and better than ever.

Last year’s event was an amazing success, welcoming thousands of visitors and winning coveted awards. Most recently, the event was Highly Commended in the category of Limited Budget Project of the Year at the prestigious Museums & Heritage Awards held in London on the 15 May 2019.

Fresh off the back of this award success, Roman Week returns this Saturday 25 May and runs until Friday 31 May 2019, and is supported using public funding by the National Lottery through Arts Council England.

Roman Week 2019 is packed with lots of events across the city and surrounding areas. This exciting programme offers something for everyone to enjoy, including a spectacular Roman re-enactment in Priory Park, Chichester, on Tuesday 28 May between 11am and 4pm. This showstopper event, which includes military and gladiator shows, will bring the Roman period to life, giving visitors the chance to find out how Roman soldiers and civilians fought and lived during this fascinating period of British history.

Another key highlight of the week is that Chichester District Council’s own archaeologist, James Kenny, with volunteers from the Chichester and District Archaeology Society, will be returning to Priory Park looking to uncover more of the park’s Roman secrets. Already uncovered are the well preserved remains of a Roman bath-house, which was probably occupied by one of the city’s wealthiest citizens, and the team are now looking to make connections between this bath suite and the house that it served. Residents and visitors will be able to watch the dig in action during the week, and on Saturday 1 June the team will hold a special day for the public. This will include a series of talks at 10am, 12 midday, 2pm and 4pm, to put the work into context and explain what has been found.

James Kenny says: “We’re really excited to be returning to Priory Park this year to discover more of its Roman secrets. We have already found some remarkable and truly unique remains buried beneath the ground, all of which indicate that the person or people who lived there were affluent and of high status. This time around, we hope for more exciting finds.”

Other events on offer during this year’s Roman Week include talks, walks, guided tours, family activities and workshops. Visitors can also immerse themselves in their Roman heritage through the eye of a lens at The Novium Museum’s blockbuster exhibition, Hollywood Rome: Reel Life in the Ancient World. This visually stunning exhibition will run until 8 September, featuring costumes, props and posters from big name modern Roman epics, such as Gladiator, Centurion, and Ben Hur.

Stephanie Thorndyke, Manager of the Novium Museum and Tourist Information Centre, says: “We are over the moon that Roman Week has just been honoured with such a highly regarded commendation in the Museums and Heritage Awards 2019. It is already a firm favourite in the district’s events calendar, and we are delighted to say that this year’s event is set to be bigger and better than ever. It’s so important for people to have the opportunity to be involved in the history of their city, and we hope that this year’s programme of exciting and educational events will bring visitors of all ages into the district to learn more about our unique and fascinating past.”

For a full programme of events, visit The Novium Museum's website www.thenovium.org/romanweek.