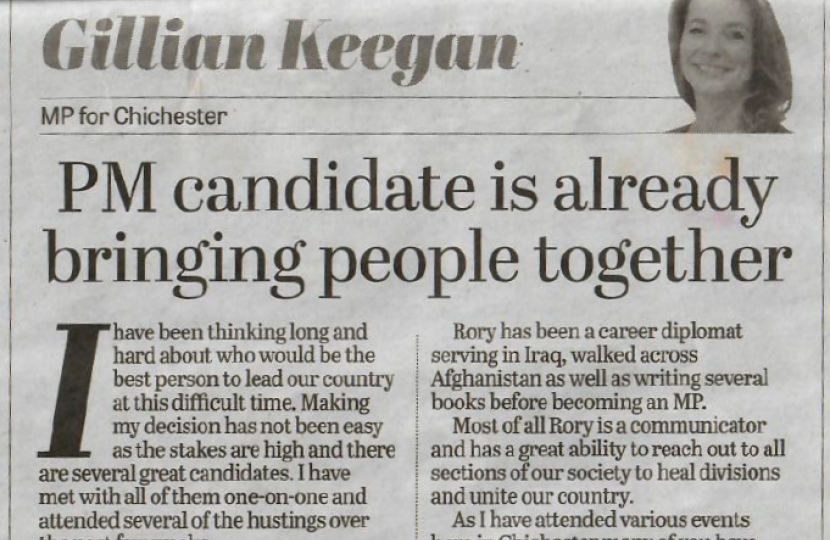 I have been thinking long and hard about who would be the best person to lead our country at this difficult time. Making my decision has not been easy as the stakes are high and there are several great candidates. I have met with all of them one-on-one and attended several of the hustings over the past few weeks.

Having given everyone a fair hearing I have decided to support Rory Stewart. In my article two weeks ago, I wrote about the qualities I wanted to see in the next Prime Minister. I think Rory has them in spades and he has the right approach to build bridges both in the party and, more importantly, in the country.  It seems I am not alone, as several recent polls have showed him out in front with the public as who they rate as the best potential Prime Minister.

Communication has been central during Rory’s leadership campaign. He has started ‘Rory Walks’, going up and down the country meeting people to listen to their concerns and explain how he intends to bring everyone together. In my experience, good politics is more about listening to people than coming up with big ideas and catchy slogans. Listening is an underrated skill.

Rory has been a career diplomat serving in Iraq, walked across Afghanistan as well as writing several books before becoming an MP. Most of all Rory is a communicator and has a great ability to reach out to all sections of our society to heal divisions and unite our country. As I have attended various events here in Chichester many of you have urged me to think about supporting him. I have listened.

This leadership election is all about Brexit and I think Rory’s stance is the best for us all. He believes in a Brexit deal and has said, it is the only way to reunify the country. I agree, given the other options of either, ‘no-deal’ or ‘no-Brexit’ will only further division. That’s why we need a leader who will bring us back together and get a deal through Parliament so we can all move on.

Some of you may have seen on the news that I introduced him as a candidate on Tuesday 11th to an audience of around 600 people and thousands more online. His launch was markedly different from the other candidates. The room was packed full of people of all ages, professions and persuasions. He is already bringing people together!