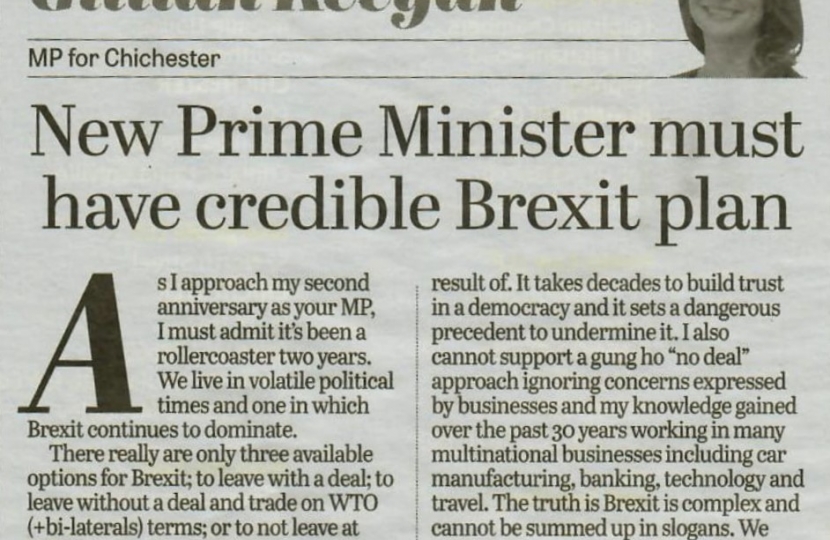 As I approach my second anniversary as your MP I must admit it’s been a rollercoaster two years. We live in volatile political times and one in which Brexit continues to dominate.

There really are only three available options for Brexit; to leave with a deal; to leave without a deal and trade on WTO (+bi-laterals) terms; or to not leave at all, which could possibly happen via a second referendum.

I know many of you have different views on Brexit and some have written to me to express those. Most people are at either end of the spectrum, pressing for no-deal or no-Brexit. Not many people write in support of a compromise position. We are polarised in our opinion which is largely unchanged since 2016 and was re-emphasised in the recent EU MEP elections.

Theresa May chose the compromise route, to leave with a negotiated deal. In the end this approach has proved to be impossible to achieve in a hung parliament. My instincts also support an approach to leave with a negotiated deal. Our democracy is one of the oldest and most respected in the world (yes even still!) and I believe we need to respect it. The EU referendum was a democratic vote that pretty much all politicians pledged to accept the result of. It takes decades to build trust in a democracy and it sets a dangerous precedent to undermine it.

I also cannot support a gung ho “no deal” approach ignoring concerns expressed by businesses and my knowledge gained over the past thirty years working in many multinational businesses including car manufacturing, banking, technology and travel. The truth is Brexit is complex and cannot be summed up in slogans. We are the only country to attempt to leave the EU using Article 50 and it is proving difficult. To attempt to leave in a hung parliament merely adds to the difficulty.

Conservative MPs and ultimately party members now have a serious responsibility to select our next Prime Minister. I haven’t yet decided on a candidate but will use two criteria; somebody who has a credible plan to leave the EU without damaging businesses, jobs and stability in Ireland and somebody who has a leadership style that can appeal broadly across the country. This is no mean feat given the division he or she will inherit but with new leadership comes a new opportunity to change the political weather. Here’s hoping for a good summer and an outbreak of common sense.

The next stop on my Pub Tour is coming up in Funtington at the Fox and Hounds on the 14th June from 5.30pm, so I hope to see you there.