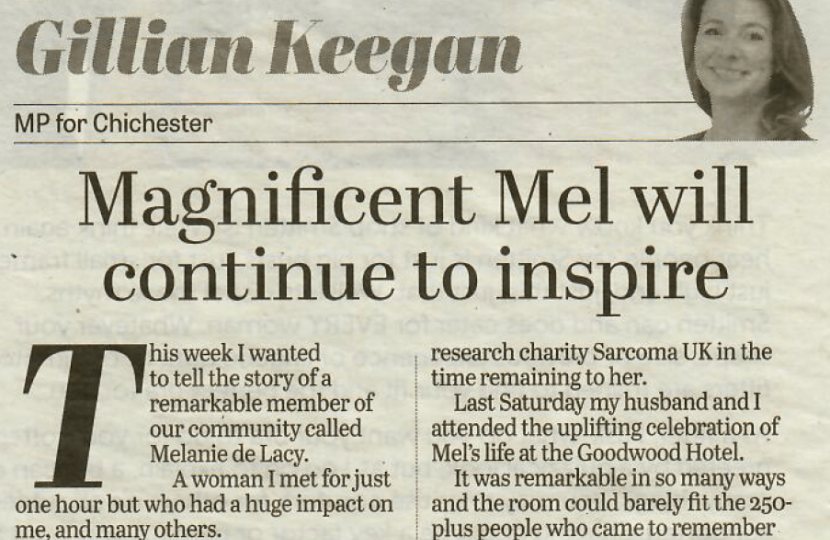 This week I wanted to tell the story of a remarkable member of our community called Melanie de Lacy. A woman I met for just one hour but who had a huge impact on me, and many others. Mel came to see me at my surgery late last year where she told me she had been for a cancer scan years ago and was told that the fibroids they found were benign. Unfortunately, they weren’t, and Mel had now learned that she had terminal cancer which, had it been correctly diagnosed all those years ago, could have been successfully treated. Mel had a husband Matt and two lovely children who now had to face the awful reality that she was going to die. On learning such dreadful news most of us, including me, would go to pieces. Not Mel – she was determined to fight the cancer as long as she could and make the most of her life in the service of others. Mel wanted to shine a spotlight on cancer misdiagnosis in the NHS to ensure that no-one else had to go through what she was now experiencing. Mel was also determined to raise as much money as possible for the cancer research charity Sarcoma UK in the time remaining to her.

Last Saturday my husband and I attended the uplifting celebration of Mel’s life at the Goodwood Hotel. It was remarkable in so many ways and the room could barely fit the 250 plus people who came to remember Mel. During the service Matt presented the Sarcoma UK charity with a cheque for £50,000 raised by Mel and her fundraising warriors to fight cancer. Mel was a brilliant triathlete and the Chichester Westgate Triathlon Club were there in force, young and old determined to keep her fundraising efforts and memory alive. Mel started a campaigning website to fundraise and inspire others to take a positive view of life and live every day to the full called “Let me be me”. No surprise then that she received an award as a local hero and inspiration to others from Spirit FM last year.

Mel sadly lost her own battle with cancer in April this year… but we will continue to fight on. For my part I will press the case in Parliament for full reporting of cancer misdiagnosis in the NHS. Mel de Lacy will continue to inspire many and I am so pleased that we met.