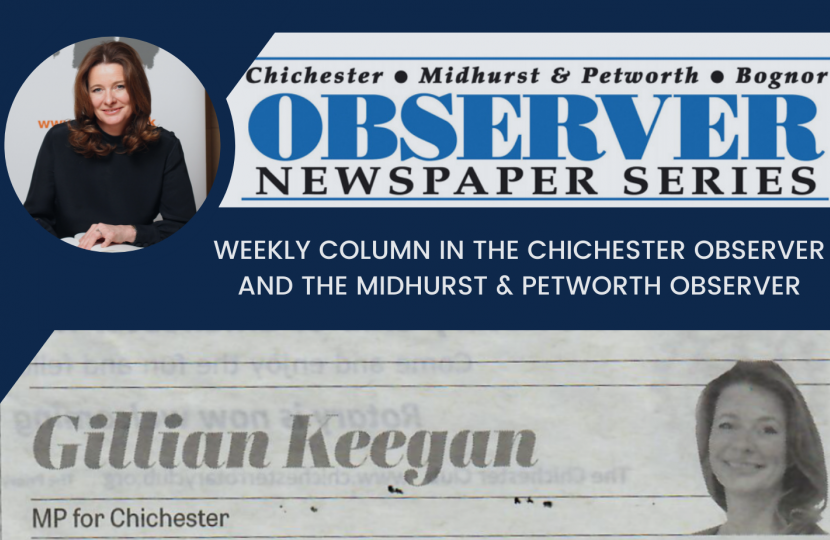 At the end of last week, the Prime Minister made a few halftime changes to the Government to help implement his priorities for the remainder of the Parliament. For me, this has meant a big change as I have been promoted to Minister of State in the Department for Health and Social Care. In my new role, I will be responsible for Social Care reform and mental health, in addition to a number of other areas, which I will write more about in the coming weeks here as well as my monthly newsletter, which you can sign up to on the home page of my website www.gilliankeegan.com.

Despite the big changes in Westminster, it was lovely to spend the weekend as always in the constituency which I kicked off with one of my Pub Tours on Friday night at The Sun Inn, in Plaistow. It was fantastic to see Ann and Robin who run the pub and meet some of the locals who came to talk about issues and concerns on both a local and national level.

One issue that was raised is a planning application to extract clay from nearby Loxwood. Many local people in the area are campaigning against the application as it will impact those who use the proposed woodland site for cycling, walking and horse riding, and will also bring an increase in HGV activity on narrow country roads. On Sunday, I met with many of the local campaigners who, despite the inclement weather, showed up to take me around the proposed site. Since then I have written to West Sussex County Council who are currently considering the application for a clay pit.

Later on Sunday, my husband and I joined around 50 volunteers at the beach in Selsey for a litter pick. The pick is organised by Blue Oceans and Mulberry Marine Experiences to keep the area clean and beautiful for locals and visitors alike. More than that, beach cleans also ensure our marine wildlife is less impacted by human activity – as we have seen on TV programmes such as Sir David Attenborough's Blue Planet. These community programmes are put on throughout the year, and you can register as a group or an individual for the next clean, which is on November 7, so if you’re interested in protecting our marine environment sign up at www.mulberry-me.co.uk