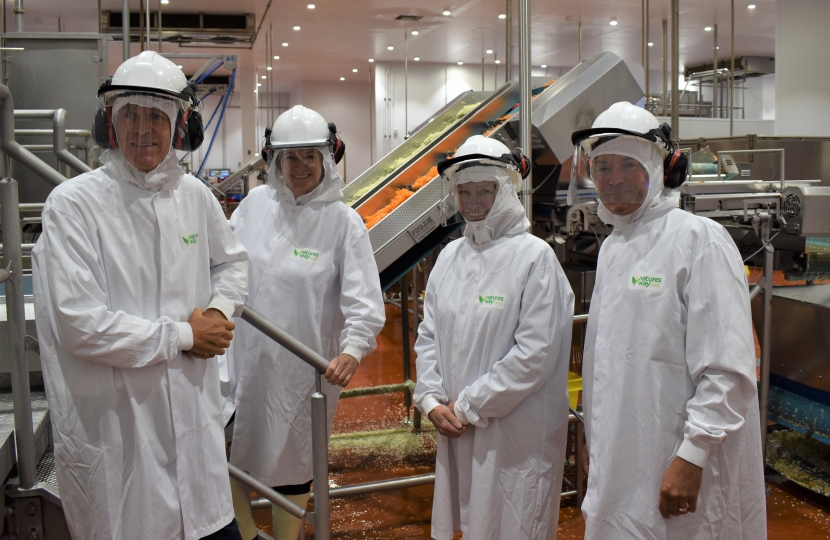 They started at Natures Way, a local food producer where they met the companies founder, Robert Langmead, and its CEO, Colin Smith, and were introduced to several of the current apprentices training and working at the company. These included two degree apprentices, Charlotte, who’s working in product development and is currently redesigning their new salad packaging and Injura who has joined the compliance and legal team. They also met Sam who’s currently on his level 3 in electrical engineering at their Selsey site. In total the company have trained 25 apprentices over the past three years and in September will be taking on a further nine.

Amanda was keen to see how investments in the apprenticeships system are working on the ground. The Conservative Government’s policies have incentivised employers of all sizes in England to take on new apprenticeships. Businesses can apply for £3,000 for each new apprentice hired as a new employee until 30th September.

On top of this, Gillian as the Minister for Apprenticeships and Skills recently launched a £7 million fund, which promises to support the creation of new flexible apprenticeships. These will create apprenticeship opportunities in project-based sectors such as the creative and digital industries and unleash new opportunities, close skills gaps in a range of sectors.

The MPs then visited Ashling Park Estate, one of the area’s award-winning wine producers. Gillian and Amanda were shown around the vineyard and tried some of the wines produced there. Both of the MPs were keen to learn more about the growing success of English wine, as an industry that has already grown by 400% since the year 2000, and is expected to support 21,000 jobs by 2040.

After visiting both businesses Amanda Milling MP, Co-Chairman of the Conservative Party, said:

“It was brilliant to join Gillian to see how businesses in Chichester are playing a key role in levelling up.

“It was inspiring to hear about how Natures Way Food are training people up providing them with vital skills to help them build a future a career.

“Ashling Park are helping to put Sussex on the map by exporting around the world and boosting the local economies.

“As we work to build back better from the pandemic and level up the whole country Chichester will be central to that recovery.”

Gillian said, “We have some fantastic businesses here in Chichester, where we make some of the finest wines and freshest food. It was great to show Amanda, some of what we are doing here to develop skills and promote business growth.”