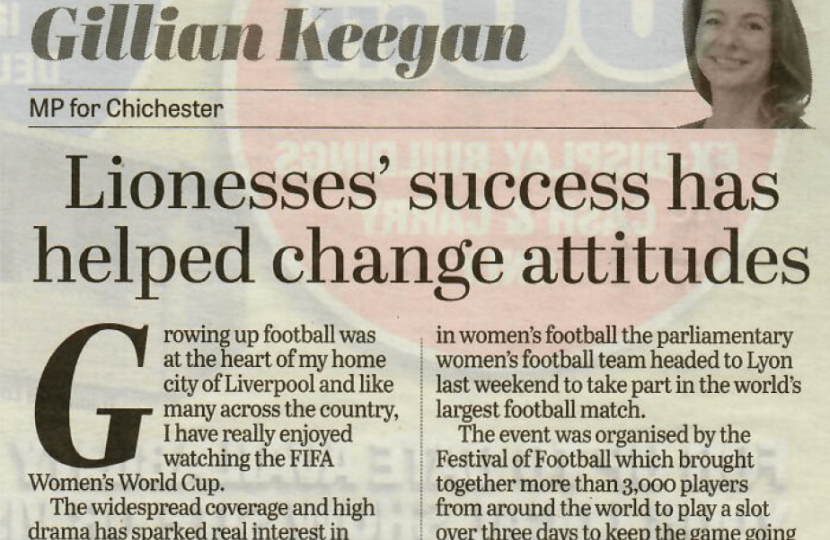 Growing up football was at the heart of my home city of Liverpool and like many across the country, I have really enjoyed watching the FIFA Women’s World Cup.

The widespread coverage and high drama has sparked real interest in women’s football with a record breaking 7.6m viewers tuning in to watch the Lionesses beat Norway in the quarter-final and reportedly 11.7m in their semi-final against the USA. Whilst the result was not what we wanted our team played brilliantly, did our country proud, and the USA had to work really hard to get through to the final.

Women’s football has struggled to attract attention as a relative newcomer to the stage. However, the Women’s World Cup and the Lionesses’ winning streak has done much to change attitudes. Organisers FIFA have forecast a total global audience of 1billion viewers across all platforms by the time the final whistle blows on Sunday. But of course, there is always more to do to ensure an equal playing field and equality in sport at both professional and grassroots level.

To raise awareness and involvement in women’s football the parliamentary women’s football team headed to Lyon last weekend to take part in the world’s largest football match. The event was organised by the Festival of Football which brought together more than 3000 players from around the world to play a slot over three days to keep the game going continuously day and night. Playing in the 1pm slot in forty-degree heat was a challenge but myself and fellow female MPs from all parties are now the proud owners of a world record.

Sport, and in particular football, is the most unifying and inspiring peace and development tool in the world. Hop in any taxi from any airport in the world and the conversation will quickly turn to football teams or favourite players. During a visit to a refugee camp in Tanzania last year I was struck by a group of young boys and a few girls playing football proudly wearing their premier league football jerseys which had been donated. In a place where there is little hope, football was keeping their dream alive that one day they may play professional football.

There is a lot more to do to gain equality in sport and in particular football but the Lionesses have done a lot to change the perception of women’s football and long may it continue.