Learn from those who worked together on D-Day 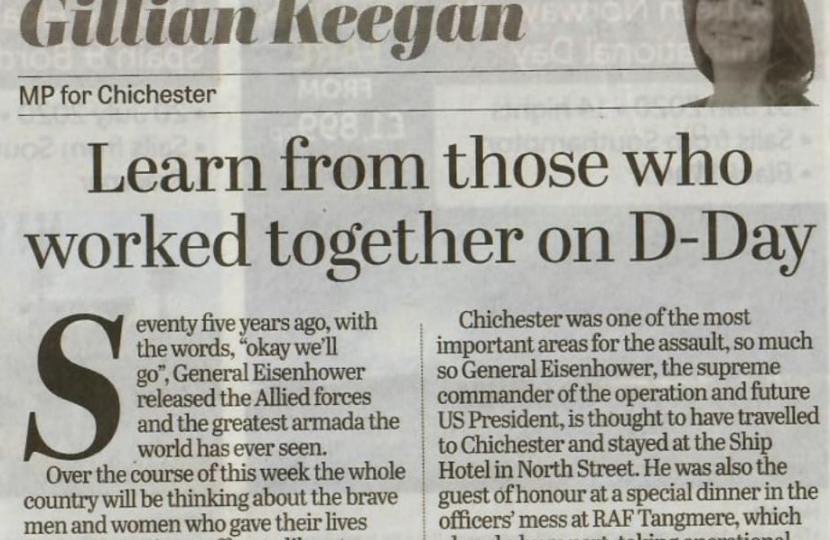 Seventy five years ago, with the words “okay we’ll go”, General Eisenhower released the Allied forces and the greatest armada the world has ever seen.

Over the course of this week the whole country will be thinking about the brave men and women who gave their lives during D-Day in an effort to liberate Europe from the Nazis. Our Prime Minister, the great Winston Churchill, was so determined to see the invasion for himself that the King had to write to him personally to instruct him not to go and risk his own life. Reluctantly Churchill agreed.

This year’s commemoration will be particularly poignant as we are marking the 75th anniversary. The centre-piece of our remembrance will take place just down the coast in Portsmouth where Her Majesty the Queen will be joined by the President of the United States, along with representatives from every country that fought alongside the UK in Operation Overlord. The event will involve 4,000 military personnel, 11 Royal Naval vessels and 26 RAF aircraft.

Sussex played a major role in D-Day operations acting as the base from which the assault was launched. Just try and imagine the tanks rolling through the South Downs and Americans playing baseball on our village cricket greens.

Chichester was one of the most important areas for the assault, so much so General Eisenhower, the supreme commander of the operation and future US President, is thought to have travelled to Chichester and stayed at the Ship Hotel in North Street. From there he inspected nearby airbases to ensure all was ready.

He was also the guest of honour at a special dinner in the officers’ mess at RAF Tangmere. Tangmere played a huge part, taking operational control of 56 squadrons from 18 airfields with pilots from around the world like Canada, New Zealand and Poland.

It is also thought Eisenhower, Montgomery and Winston Churchill watched a final rehearsal of the landings from the Bracklesham Bay Hotel as their men ran landing drills.

Our local history is full of incredible stories, although today there’s little left of our war-time past. That is why I have been supporting the ‘Save Tangmere Tower’ campaign that’s working to restore the former RAF control tower and preserve a huge part of our national heritage.

In today’s world we face challenges that similarly need a global coalition like climate change, terrorism and cyber warfare. So I hope as we remember the bravery of those who crossed the channel 75 years ago and we learn a lesson from those who all worked together irrespective of race, religion and creed. As we look to our future I know our country will always be a good neighbour and partner to the other nations of Europe as our history proudly shows.