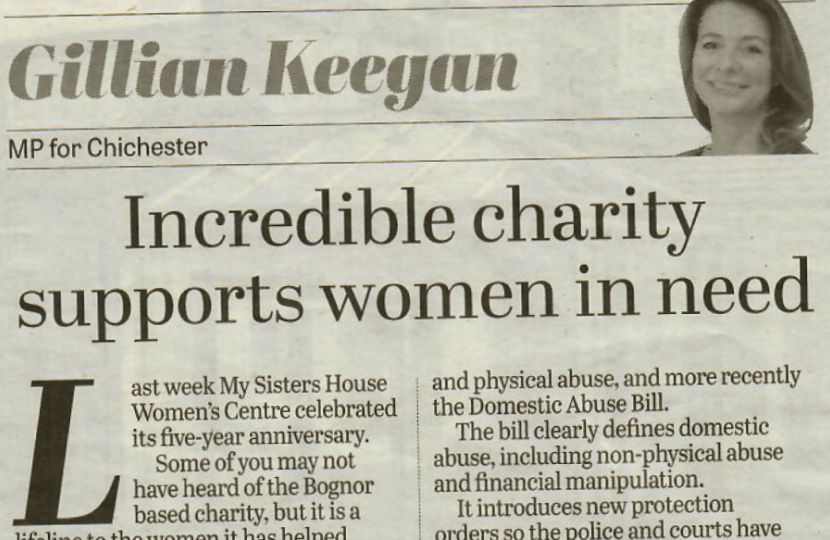 Last week My Sisters House Women’s Centre celebrated their five-year anniversary. Some of you may not have heard of the Bognor based charity, but they are a lifeline to the women they have helped across the Chichester and Arun region. I recently visited to meet the staff and hear all about the incredible work they do to support women during their most vulnerable time. The charity, which was set up by the inspirational Julie Budge, helps women with domestic abuse, addiction, poverty, illness, or relationship breakdown. They offer a bespoke range of practical, emotional and therapeutic support and advice to women aimed at helping them get their lives to a better place.

Since they set up their drop-in service in Bognor, which is open Monday to Friday, they have supported 135 women many of whom had nowhere else to turn. Nearly 70% of them were victims of domestic abuse. Nationally one in four women suffer from this, something which I raised in Parliament during PMQs to the former Prime Minister, Theresa May. Both as Home Secretary and PM she championed this issue; having introduced coercive control legislation in 2015 that gives parity to emotional and physical abuse, and more recently the Domestic Abuse Bill.

The Bill clearly defines domestic abuse, including non-physical abuse and financial manipulation. It introduces new protection orders so the police and courts have measures to intervene quickly, and it puts stronger systems in place for court hearings to keep victims and perpetrators apart. The legislation will also bring in a new Domestic Abuse Commissioner who can speak up for those affected, raise public awareness, and encourage preventative work.

Last month I supported a report by Agenda, who represent at-risk women and girls. The report looked further at domestic abuse and suggested changes that need to be undertaken to ensure support is comprehensive across the country.

I am also scheduled to visit Chichester’s Lifecentre next month, to learn more about the support they give victims of rape and sexual abuse. I will be meeting their dedicated support staff who work with victims to ensure they are getting the help they need. Sometimes things go wrong in life and thankfully there are wonderful charities to help in times of need.

If you need support please get in touch with My Sisters House, on 01243 697800, or just drop-in for a cup of tea and biscuit, the team there are on hand to help.

Gillian has, for several years, championed getting more Women into Parliament and senior leadership roles.  She been elected at the Co-Chair for the Women and Work APPG, this All Party Parliamentary Group provides a forum to constructively examine and debate the role that policy makers can play t