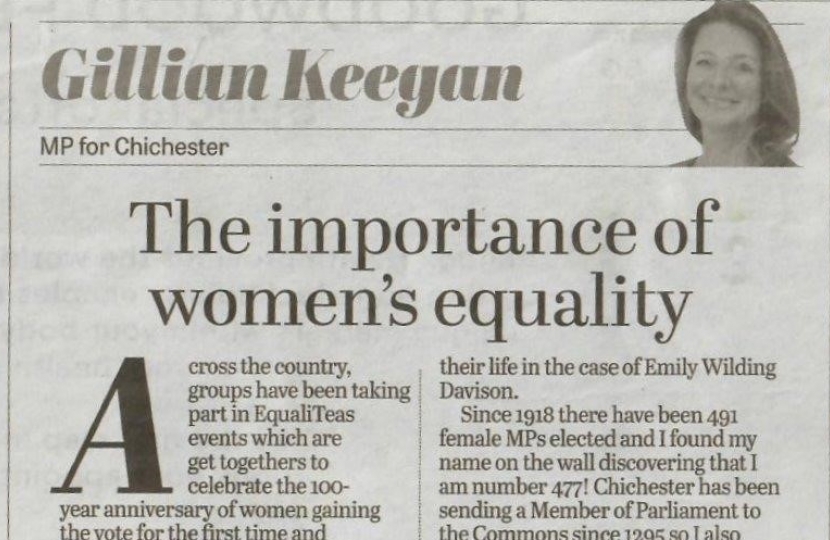 Across the country, groups have been taking part in EqualiTeas events which are get togethers to celebrate the 100 year anniversary of women gaining the vote for the first time and the opportunity to get elected to Parliament. We have had some wonderful events in the Chichester constituency with the 4th Chichester Guides, 1st Hunston Brownies, 1st Midhurst Rainbows and professors, pupils and guests at the University of Chichester. Tea, squash, biscuits and cakes were prepared and we discussed and debated the importance of women’s equality, how long the campaign took for women to get the vote (more than 60 years) and how important it is to use your voice and your vote to raise issues and bring about change. There is also an exhibition in the Houses of Parliament which describes the long campaign for women and working class men to get the vote and the sacrifices that key campaigners made, many being imprisoned, force fed or even losing their life in the case of Emily Wilding Davison. Since 1918 there have been 491 female MPs elected and I found my name on the wall discovering that I am number 477! Chichester has been sending a Member of Parliament to the Commons since 1295 so I also discovered that I’m the first female MP from Chichester to sit in the House of Commons in 723 years which is quite something….!

In Parliament this week I was selected to sit on the bill committee which is shaping new laws to make upskirting a criminal offence. Most of us have only recently heard of this practice of taking pictures up somebody’s skirt or kilt without their knowledge due to recent media coverage.  As well as being a terribly intrusive offence I am learning it is more widespread than I imagined and there is even a market for buying and selling these images on the internet. It is important that we update the law to make upskirting a criminal offence after many victims campaigned for this change after realising that existing laws don’t protect them.