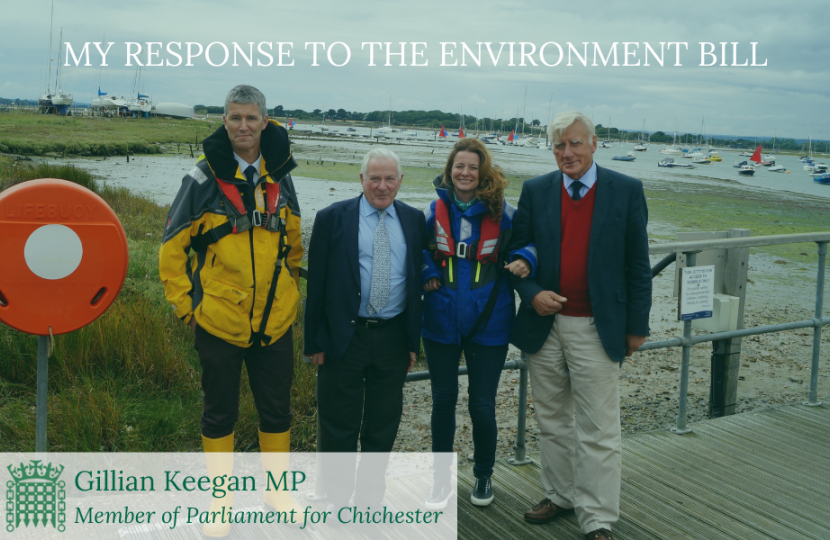 There has been a fair amount of misleading information on social media about the use of Combined Sewage Overflows (CSOs) which are currently permitted under licence by the Environment Agency. First, let me be clear on my personal view, I am very concerned about the use of storm overflows, and of course do not need convincing as to the importance of ensuring our harbours, rivers, and estuaries are clean and environmentally healthy. This is an issue I have been very focused on since I was elected in 2017 when I first discovered the gruesome details of how we manage our water system.

Many people have approached me, and written to me, about the recent votes on the Environment Bill. In particular, concerns have been raised that a section (141A) of Amendment 45, tabled by the Duke of Wellington in the House of Lords, was removed. The section sought to place a new duty on sewerage undertakers in England and Wales (Southern Water in our case) to demonstrate progressive reductions in the harm caused by discharges of untreated sewage.

This sounds like the right action to take, and indeed is something I absolutely support in principle. However, the issue with this amendment was that there is no plan as to how this would be delivered and no impact assessment whatsoever.

I appreciate the argument that such a plan is not essential, as it is certainly my ambition to end CSOs. However, anyone involved in work to bring this about knows that changing the law without a plan is not the solution. Indeed this could have a very negative impact on the operation of our sewage system – after all, if we banned sewage discharge overnight the only alternative would be for the overloaded system to back up into our homes and onto our streets.

To eliminate storm overflows, we have to transform a system that has operated since the Victorian Era, the preliminary cost of which is estimated to be at least £150 billion. For context, £150 billion is more than the entire schools, policing and defence budgets put together. The higher-end estimates are significantly more than we have spent on the pandemic to date.

Therefore we need to take a different approach to achieve our common goal to eliminate the use of CSOs. The remaining Lords amendments relating to storm overflows were passed,  including the rest of Amendment 45; one of which places a legal duty on the Government to publish a plan by 1 September 2022 to reduce sewage discharges from storm overflows. A separate amendment will also place a duty on the Government to publish a report on the ‘mechanics’ of eliminating overflows entirely (also due before 1 September next year).

This is essential, as it will provide Parliament and the public with up-front, clear and comprehensive information on the cost and impact of eliminating combined storm overflows.

I think it is important to reiterate, I fully supported the ambitions of the Duke’s amendment. However, I believe we need a detailed response where we have a strategy and a plan, which can then be challenged, improved, and followed up on, as opposed to legislating without any way to achieve the goal.

That said, the Environment Bill is key to resolving this issue and legislates to ensure the production of plans to reduce and eliminate storm overflows. The Bill will ensure firm and immediate action to tackle storm overflows in the short-term by introducing:

Outside of the Bill, my colleagues have made their expectations crystal clear in Defra’s draft Strategic Policy Statement to Ofwat. The Government will be telling the industry’s financial regulator that it expects water companies to take steps to “significantly reduce storm overflows”, and that it expects funding to be approved for them to do so. Defra Ministers will also undertake a review of legislation which would require Sustainable Drainage Systems (or SuDS) to be constructed to ministerial standards on new developments, which will reduce the pressure on the sewage system through the reduction in surface road water.

All of these measures are informed by the work of the Storm Overflows Task Force, which the Government established in August 2020 to bring together key stakeholders from the water industry, environmental NGOs, regulators, and Government in order to drive progress in reducing sewage discharges. The Taskforce has agreed on a goal to eliminate harm from storm overflows.

I cannot overstate how seriously I take this issue – and that is why it is important that we vote for legislation that will deliver real improvements as opposed to ill-thought through legislation which could result in sewage backing up in many public areas and private homes. Since becoming the MP for Chichester, I have been working on these issues and pushing for better outcomes locally. This work has helped increase investment in the network in villages around the Chichester area and has brought together the key parties responsible. As a result of this work our area now has several working groups dedicated to collaboratively working to solve poor water quality in Chichester Harbour and the surrounding waterways.

Furthermore, I have co-founded a forum of MPs that covers the Solent Region, who are collectively holding Southern Water’s feet to the fire and ensuring the Minister for the Environment, Rebecca Pow is aware of the issues we face locally. Successfully so, as just last week she spoke about our efforts in Parliament.

We have made, and are continuing to make, massive strides locally - every key agency that has a role in monitoring, enforcement, operations, environmental management, planning, governance and policy have come together to tackle the water quality situation in our area. As part of this work, we are hoping to achieve live monitoring of inputs to the Harbour and surrounding waterways, but then also to implement solutions. Including reducing the pressures on the sewer system and reducing the CSOs that plague our national waterways. Locally, there has also been some significant sewage infrastructure investment, totalling over £81 million in my constituency alone, covering the major wastewater treatment works.

My promise to you is I will continue to do whatever I can within my power to support the delivery of real improvements within the Chichester Constituency, and the UK as a whole.

During or after a period of considerable wet weather, combined sewers can become overwhelmed by rainwater (surface water) entering our network from road and roof runoff (in some cases>95% of the water entering the system). To protect public health, people’s homes and public property, flooding of the environment and to protect the operation of the wastewater treatment works, this excess water has to be released to watercourses.

What is a CSO made up of? - Source: Southern Water

What is released is not accurately described as "raw sewage" but wastewater, which also includes water from washing machines, showers, dishwashers, etc, heavily diluted by surface water which is rain and run-off from roads and land.

These controlled releases are permitted by the Environment Agency, and part of the design of the sewers inherited by water companies from local authorities in the 1970s.

How often do they happen and where can we find out more information on CSOs?

Apart from the Solent and coastal background nitrogen, the main source of nitrogen in Chichester Harbour is from rural diffuse nitrogen from agriculture in the catchment that enters harbour mainly via rivers.

Most of the rivers in the Chichester catchment are fed by groundwater. The groundwater has a high nitrate content as a legacy of historic farming practices. Nitrate leached from the soil can be ‘held-up’ in the groundwater system for decades before it enters rivers. Sources of nitrogen from sewage treatment works in Chichester Harbour are much smaller and contribute 10% of the nitrogen sources.

What is happening at Pagham Harbour? - Source: Natural England

Following a recent meeting with Natural England, I followed up in writing to ask whether the agency was undertaking any work to consider any impacts and their sources on the Manhood Peninsula.

Pagham Harbour is yet to receive a condition review and therefore does not currently have a nutrient neutral methodology as per those provided to the Chichester Harbour catchment. However, I’ve been advised that there is an investigation via the Environment Agency’s ‘Water Industry National Environment Programme’ (WINEP) into the impacts of wastewater into Pagham Harbour on the MCZ (Marine Conservation Zone) which will report in 2022 and Natural England are anticipating a condition assessment of Pagham Harbour by 2023.

Have Southern Water been fined in recent years?

Recently, thanks to an investigation by the Environment Agency a fine of £90million sets a record as the largest handed down by the Court following an investigation by the Environment Agency. It relates to 51 offences that took place across Sussex, Hampshire and Kent between 2010 and 2015, including instances in our area around Chichester, Bosham and Thornham. Southern Water, as with all water companies, has a responsibility to operate within its permit conditions as agreed with the Environment Agency. This fine reflects a period of deliberate, widespread and repeated offences that cannot be tolerated. It is right that companies who fail in their duties to the environment are held accountable. Importantly for consumers, this fine will be paid solely from Southern Water’s operating profits to make sure this is not passed onto customer bills.

As part of this morning's Government media round, Gillian went on Times Radio to discuss the booster vaccine programme expansion and the new measures being put in place to tackle the spread of the Omicron variant.