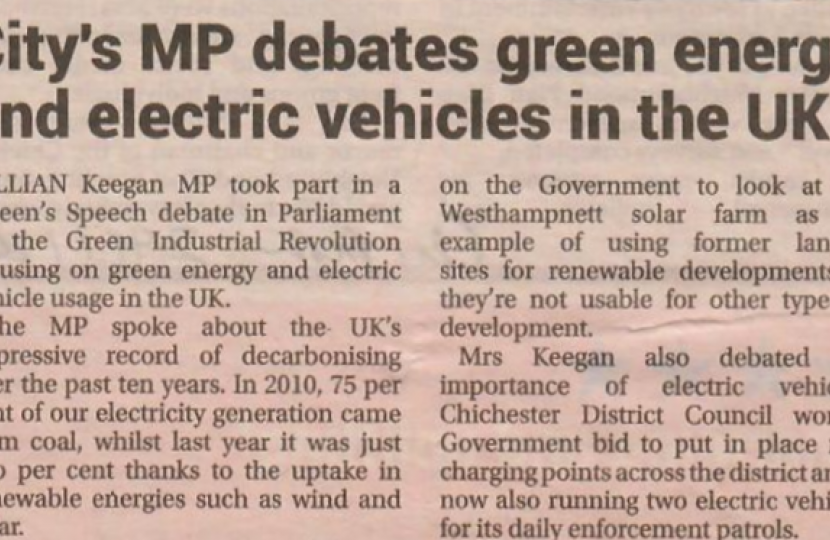 Gillian Keegan MP took part in a Queen’s Speech debate in Parliament on the Green Industrial Revolution focusing on green energy and electric vehicle usage in the UK.

The MP spoke about the UK’s impressive record of decarbonising over the past ten years. In 2010, 75 per cent of our electricity generation came from coal, whilst last year it was just two per cent thanks to the uptake in renewable energies such as wind and solar.

The UK now boasts the world’s largest offshore wind energy production and 99 per cent of all solar panels have been put in place over the past decade. The Chichester MP praised this work, some of which has been undertaken locally. West Sussex County Council’s solar schools’ programme now produces the same amount of electricity as the entire solar farm at Westhampnett.

Saving our local schools on average £2,000 per annum. Mrs Keegan emphasised the importance of work such as this and called on the Government to look at the Westhampnett solar farm as an example of using former landfill sites for renewable developments as they’re not usable for other types of development.

The MP finished on a positive note highlighting the economic benefits of leading the green industrial revolution, emphasising the UK’s recent creation of 400,000 green jobs and the potential global investment opportunities. In her final remarks she reflected on the forthcoming UN climate summit that will be hosted by the UK saying, “Later this year, we will welcome the world to Glasgow to talk about climate action at COP26, and I want our message to be simple: We in the UK are taking a lead and so can you.”