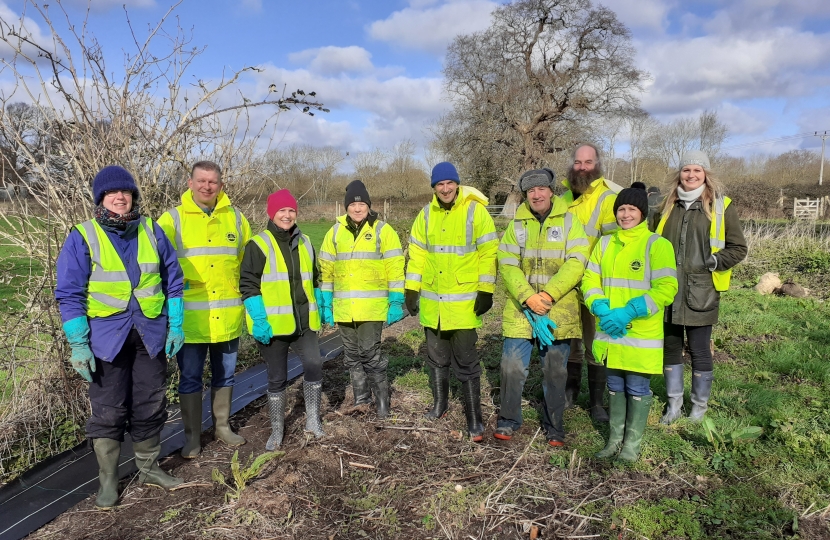 Chichester District Council has joined forces with local organisations at a working party in Fishbourne this week to help protect one of the district’s rare chalk streams.

The stream runs along the eastern side of Fishbourne Roman Palace, and is one of only 200 chalk streams on the planet, providing a unique habitat for the district’s wildlife. A chalk stream is a river that provides pure water from underground chalk aquifers and springs, making them ideal for lots of animals to breed and thrive.

On Wednesday, the Council’s Strategic Leadership Team worked alongside volunteers from The Chichester and District Archaeology Society, and staff from Fishbourne Roman Palace — which is owned by the Sussex Archaeological Society — to enhance the stream.

As part of this work, silt was removed from the base of the stream and used to establish a foundation for vegetation along the east bank. Manual clearing of ivy and nettles from both banks was also carried out to allow a greater variety of plant species to become established.

As well as being a site of archaeological interest, adjacent to a Scheduled Monument, this area has been identified as a Biodiversity Opportunity Area – which recognises the potential it holds to improve biodiversity – and is one of a group of proposed wildlife corridors in the Chichester District Local Plan. The stream also supports a small population of water voles, which are a protected species.

“Chalk streams are vital for local wildlife,” says Councillor Penny Plant, Cabinet Member for Environment and Chichester Contract Services. “All chalk rivers are fed from groundwater aquifers, which mean they have clean, clear water at relatively stable temperatures. These unique conditions along with the chalk bedrock support an unusual diversity of wildlife, including important fish populations and insect species.

“We are currently working on a Strategic Wildlife Corridors project, which aims to deliver a range of actions to safeguard the district’s wildlife, allowing species to move and their populations to thrive.

“The project also aims to help the district’s wildlife become more resilient to environmental change; engage local people with their district’s wildlife; and build on the knowledge and expertise of the council’s Community Wildlife Officer role. It also links with a policy in the developing Local Plan Review, which aims to direct development outside of these areas in order to help protect and maintain these corridors.”

Melanie Marsh, Property Manager for Fishbourne Roman Palace, says, “We are delighted to be involved in this project, working alongside Chichester District Council and Chichester and District Archaeological Society, to protect the many species which call this unique stream home.”

Guidance on Tourism and the Visitor Economy, published today, will help to get the tourism sector back up and running so the public can safely take domestic holidays  and visit attractions on days out