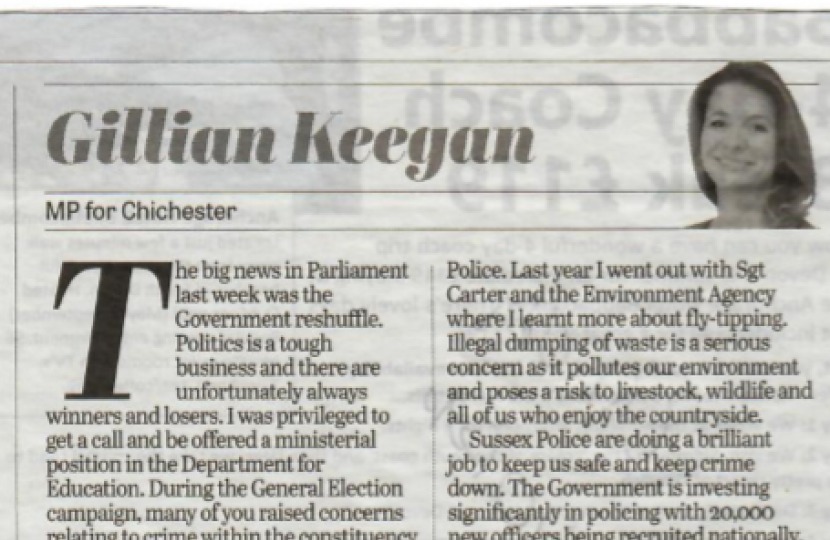 The big news in Parliament last week was the Government reshuffle. Politics is a tough business and there are unfortunately always winners and losers. I was privileged to get a call and be offered a ministerial position in the Department for Education.

During the General Election campaign, many of you raised concerns relating to crime within the constituency including; burglary, fly-tipping, speeding plus garden and farm machinery theft, particularly in rural areas.

I recently spent the day with Sussex Police, to see how they are tackling these issues and what I can do as an MP to support them. On the day, I joined a Police and Community Support Officer (PCSO), Jason Lemm who was working to prevent anti-social driving and speeding through our villages. There is currently a joint initiative run by Sussex Safer Roads Partnership and Sussex Police, called Operation Crackdown. The operation asks communities to report anti-social driving. This data is then used by the police to issue warnings, develop a greater understanding of hotspots and help them build cases against offenders. In some instances, where evidence is gathered, they may even be able to prosecute. To find out more, and start reporting visit the Operation Crackdown page:

This was my third time out with the Police. Last year I went out with Sgt. Carter and the Environment Agency where I learnt more about fly-tipping. Illegal dumping of waste is a serious concern as it pollutes our environment and poses a risk to livestock, wildlife and all of us who enjoy the countryside.

Sussex Police are doing a brilliant job to keep us safe and keep crime down. The Government is investing significantly in policing with 20,000 new officers being recruited nationally, which means 379 locally. On top of this our local Police and Crime Commissioner, Katy Bourne, announced a further 100 PCSOs are being brought in; meaning we will have a named PCSO for every community across the county. This will bring back the days of local area policing.

As an MP, I work closely with the police to support them in Parliament, speaking in debates and voting through legislation such as the Offensive Weapons Bill; that empowered the police to better tackle knife crime, and Finn’s Law; introduced in the last Parliament, to increase protections to service animals. I regularly raise your concerns to them, ensuring they can take actions which increase our safety. We are very lucky to have a brilliant, dedicated policing team in our area and I know we are thankful for all the work that they do to keep our streets, towns and villages safe.

Guidance on Tourism and the Visitor Economy, published today, will help to get the tourism sector back up and running so the public can safely take domestic holidays  and visit attractions on days out