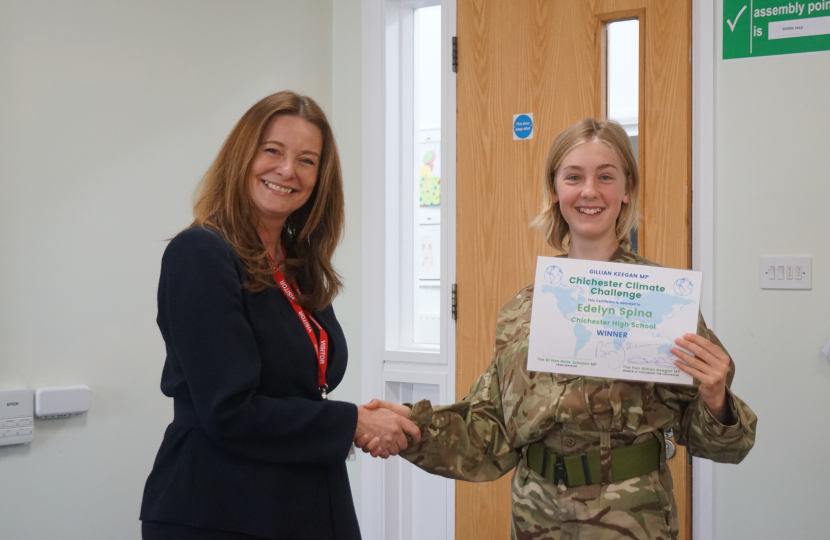 Late last year it was Edelyn Spina, from Chichester High School, won the Chichester Climate Competition (senior schools) put on by local MP, Gillian Keegan, ahead of COP26. This week Gillian visited the High School to award Edelyn with a certificate signed by herself and the Prime Minister, Boris Johnson. The award was delayed due to Covid-19 restrictions in place at the school.

Gillian’s climate change competition asked children at primary school to submit a poster outlining an area of environmental improvement and at secondary school level, students were asked to submit a written proposal to combat climate change, which had to be both feasible and local. Edelyn’s idea was to use public land, including school campuses, to plant more trees and improve biodiversity. Central to her idea was education; developing a local programme to teach both children and adults about the benefits of good biodiversity and how they themselves can achieve it in their own homes, and communities. Also in attendance, were Headteacher, Mrs McKeown, and Edelyn’s Parents.

Gillian said: “It was lovely to meet Edelyn and finally congratulate her in person. Both the Prime Minister and I were very impressed with her proposal, especially its focus on education; encouraging others to get involved in improving biodiversity and developing green spaces. It was fantastic to see how passionate Edelyn is about environmental improvement and to hear about her role in the youth parliament - I know she has a bright future ahead of her.”

The junior competition winner was Gina, from St Richard’s Primary School, who won with her poster of an Orangutang that called on governments to reduce deforestation. Gillian visited the school at the beginning of 2022 to surprise Gina with the news and award her with a certificate. At the time Gillian told the assembly, “Gina’s message got through at COP26 - over 100 world leaders agreed to reverse and end deforestation within a decade.”