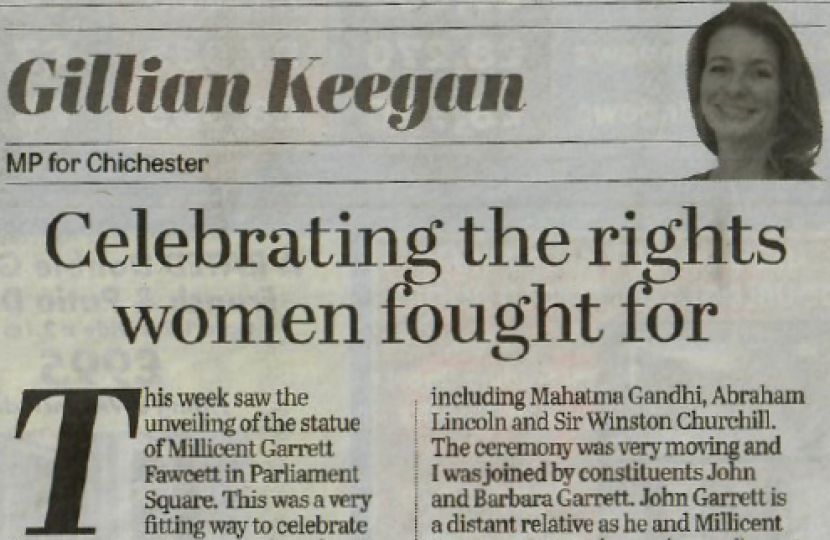 This week in Parliament saw the unveiling of the statue of Millicent Garrett Fawcett in Parliament Square. This was a very fitting way to celebrate the 100-year anniversary of the first women to get the vote and women being permitted to stand for Parliament. Millicent Garrett Fawcett was a suffragist who campaigned tirelessly since aged just 19 for the right for women to vote which formally started with a petition presented to Parliament by John Stuart Mill and Henry Fawcett in 1866 and lasted sixty years. The slogan which you still see to this day was “no taxation without representation”. There were successes and progress on the journey with women allowed to service on school boards from 1870 and on Parish and District Councils from 1894. Many will be more familiar with the suffragette movement which was more focussed on direct action as it was thought the peaceful, democratic suffragist movement was not making quick enough progress. The eventual breakthrough for women’s suffrage came as result of the First World War which saw many women assist the war effort in every way possible.

The statue in Parliament Square is the twelfth however it is the first of a woman. She joins illustrious company including Mahatma Gandhi, Abraham Lincoln and Sir Winston Churchill. The ceremony was very moving and I was joined by constituents John and Barbara Garrett. John Garrett is a distant relative as he and Millicent Garrett Fawcett share a (several) great grandfather.

Millicent Garrett Fawcett was a remarkable woman who as well as campaigning for women to get the opportunity to vote and become MPs also championed many other issues. She fought to protect children from reports of maltreatment in the Boer War, for sex workers rights and campaigned for equal access to education while established a college in Cambridge.

I was very struck by Theresa May’s words at the unveiling of the statue. “For generations to come, this statue will serve … as inspiration to all of us who wish to follow in her footsteps”. As a woman Member of Parliament, and the first woman MP in Chichester, it would be difficult not to recognise the debt of gratitude we owe to Millicent Garrett Fawcett and fellow members of the suffrage movement.

Fast forward to the 21st century and later this week I co-chaired an APPG event on Women in Technology. 2018 is the Year of Engineering and there is huge focus on encouraging more young people, including more girls to study science, technology, engineering and maths. Having started as an apprentice, I worked in technology for almost 20 years and if we get it right it can be a game changer. The use of STEM is a brilliant social mobility tool and I’m sure Millicent Garrett Fawcett would be impressed by the use of technology and online petitions which resulted in her statue being in Parliament Square.