Brexit debate must be handled with respect 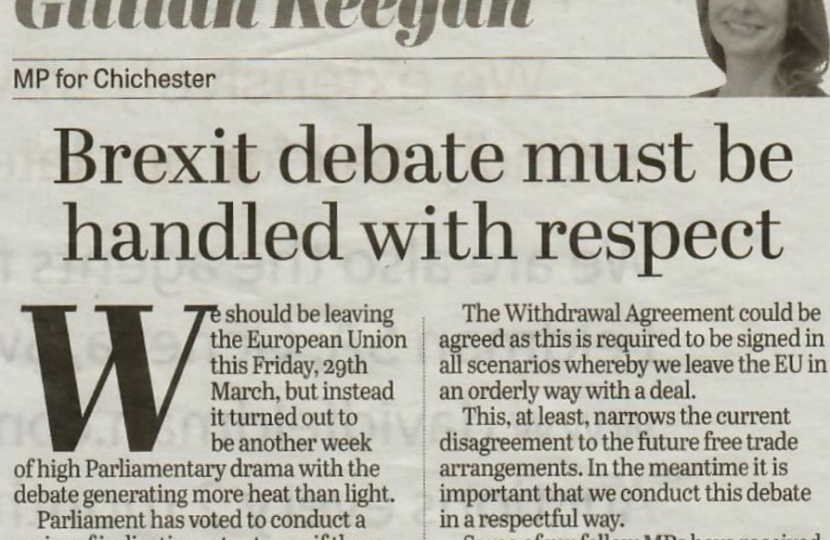 We should be leaving the European Union this Friday, 29th March, but instead it turned out to be another week of high Parliamentary drama with the debate generating more heat than light. Parliament has voted to conduct a series of indicative votes to see if there is a way through the current impasse and agree a deal which can secure a Parliamentary majority. I continue to believe the deal the Government has negotiated and agreed with the EU 27 represents the best option available to respect the result of the referendum and exit the EU in a careful and collaborative way. This deal is in two parts. The first part, the Withdrawal Agreement covers citizens’ rights and money whilst unwinding ongoing commitments and defining transition arrangements. The second part is the Political Declaration which keeps close co-operation on trade, security, scientific research and many other areas whilst ending Freedom of Movement and the Common Agricultural and Fisheries policies.

Although I did not vote for this process, I will engage positively with this initiative in an attempt to see if there is a deal which can be agreed by Parliament which respects the result of the Referendum whilst protecting jobs and livelihoods of people across the country. The Withdrawal Agreement could be agreed as this is required to be signed in all scenarios whereby we leave the EU in an orderly way with a deal. This, at least, narrows the current disagreement to the future free trade arrangements. In the meantime it is important that we conduct this debate in a respectful way. Some of my fellow MPs have received death threats and last week I was informed that one person had even asked our local Police in Chichester to arrest me for being a national traitor because I supported leaving the EU with a deal. Whatever our views on this divisive topic we cannot allow our politics to be conducted in this way. I'm sure I'm not alone in longing for us to go back to the time when no-one knew or cared what each of us thought about our trading relationships with the EU and when we were not defined as "leavers" or "remainers".

The highlight of last week took place at the Chichester Baptist Church when I attended the World Down Syndrome Singing Hands concert organised by Suzanne Miell-Ingram and Tracy Upton in conjunction with PACSO. It was such an uplifting afternoon and inspired me much more than the current events at Westminster. My nephew Joseph has Down Syndrome so the event had a personal significance for me and it was wonderful to spend time with the children and sing, dance and celebrate.