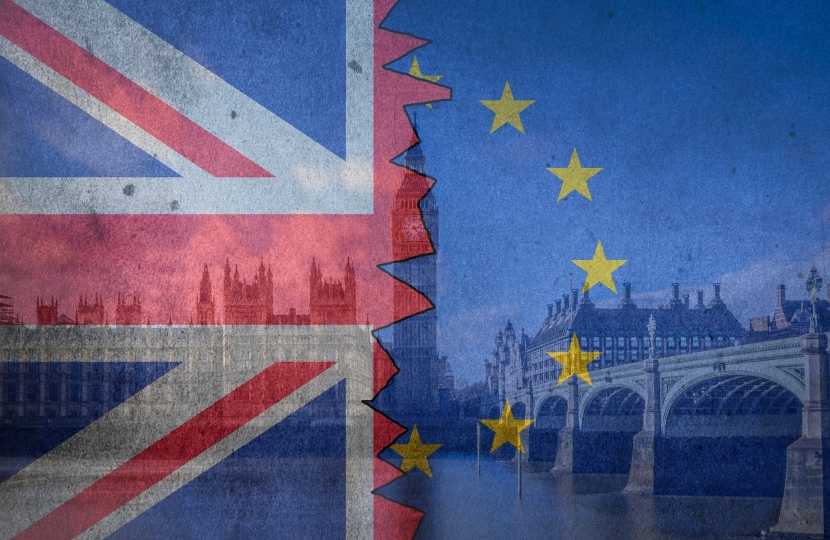 A number of people have written to me asking for my opinion on the Brexit discussions which I have detailed below and will update as events change. This is my personal view and is largely based on my experience as a commercial negotiator during a thirty-year business career in car manufacturing, technology, banking and financial services. This does not make me an expert in trade negotiations with Europe but does give me an insight into the business operating models which have built up as a result of the UK being part of the EU trading bloc for more than forty years.

Keep up to date on my views on Britain's withdrawal from the European Union below:

This week it’s back to school and work for many after a summer break. A time for reflection and a time for new challenges, a changing of the seasons. There are definitely challenges in the political world at the moment. I have written before about my approach to Brexit which is that we should honour the result of the Referendum but we should leave in an orderly way, with a deal. I have spent too long working in many different business sectors to think that a “no deal”/WTO Brexit will have no or limited impact. It will have an impact, perhaps not as drastic as some reports, but meaningful and in my view unnecessary. I have voted three times to leave with a deal. Some claim that the agreement negotiated over the last three years with the EU is not really Brexit. Of course, people have their own image of what a “real” Brexit is but the Withdrawal Agreement is only the first stage of the process. It’s almost, dare I say it, the easy bit, but in a hung Parliament it’s proved anything but easy.

Just before recess I voted to ensure that Parliament could not be suspended in a bid to leave the EU, without a deal, at the end of October, without further scrutiny. Over summer the new Prime Minister decided to prorogue Parliament and bring forward a new programme for Government via a Queen's Speech. Importantly this ensured Parliament would be sitting from 14th October so the result of any Brexit renegotiation could be brought to Parliament. This did reduce the parliamentary time available but in my view, still left enough time to scrutinise and vote through a deal to leave the EU or a plan to leave without a deal. Some of my colleagues disagreed and concerned about this unusual manoeuvre, determined to pass new legislation to extend our departure from the EU until January 2020. Despite strong views amongst many in Chichester I did not support this approach as I believe the new PM deserves the time to find a deal that would be acceptable to Parliament. However, I’m still very concerned about leaving without a deal particularly when 92% of Conservative MPs, including leading Brexiteers such as the Prime Minister and Jacob Rees-Mogg, voted to leave with the previously negotiated Withdrawal Agreement. Yes this contains risk but there is no risk free way to leave the European Union, and it is more responsible than leaving on very basic WTO trading terms and creating a border between Northern Ireland and the Republic of Ireland; with all the risk that entails.

Some very highly respected colleagues have had the Conservative Whip removed. This is deeply concerning and I hope that this is rectified soon. It looks very likely there will be an election in the near future so everybody will, once again, get an opportunity to decide who you would like to represent you in Parliament. Our constitution and democracy has been challenged by Brexit but ultimately you, the voters, will always have the power to determine our destiny.

We now have a new Prime Minister in place and a new approach to Brexit. A deal was agreed with the European Union but Parliament has now failed to vote to support this deal on three occasions. It is clear that the current withdrawal agreement will not pass through the House of Commons despite the fact that 90% of Conservative MPs voted for the deal including the current Prime Minister, Boris Johnson. Unfortunately in a hung parliament this is not enough to proceed. This leaves two options available assuming you wish to respect the result of the referendum; first to try to renegotiate a deal with the European Union which can gain wider support in parliament or if this is not possible leave, without a deal, on World Trade Organisation (WTO) terms. In my view there is little point in delaying the date we leave the EU further as it is not more time we need but more compromise on all sides. I have said many times that I believe leaving the EU without any deal and trading on WTO terms would create unnecessary risk for thousands of businesses and millions of people across our country. This seems to be a very drastic action resulting from the fact that thirty MPs, from any party, did not support the deal which had taken three years to negotiate.

Currently the EU are stating they will not renegotiate any terms of a deal so we are stuck between a rock and a hard place. In my view the request for the EU to reconsider the permanence of the backstop is a reasonable request. Indeed, the parties already tried to address concerns raised about the backstop in March 2019  (LINK) where both sides tried to provide comfort that they did not wish the backstop to be applied at all and if it was it would be replaced with a permanent agreement including technology solutions on the Irish border when available. Unfortunately these side letters were not judged to have sufficient legal status (LINK) however, in my view it is reasonable to request that this “agreement in principle” be reopened and the parties consider how the backstop could be removed or replaced.

The Prime Minister has stated that it is his preferred position to leave the European Union in an orderly manner with a deal which is agreed through parliament. I support this position as it is by far the best approach to enable Brexit for both the UK and the EU27. There are of course some parties who wish to ignore the result of the referendum and remain in the EU, this is not a position I support. I believe we must respect the result of the vote however, this does not mean we should leave at any cost or inflict considerable economic damage to our country. We cannot leave the European Union without taking a risk, however, in my analysis and in my experience the risks contained within the withdrawal agreement were manageable and certainly less risky than leaving to trade on WTO terms. Reaching an agreement will require compromise from the EU, the UK Government and Members of Parliament and I hope as we near the deadline of 31st October 2019, positions will shift and an agreement can be reached.

In order to make a success of Brexit it is my view that we need to leave with an agreement. This is why myself, the leadership contenders and 90% of Conservative MPs voted for the deal which had been agreed with the EU over the past three years. In my opinion this deal provides a workable solution and delivered on the result of the referendum whilst protecting our economy from the damaging consequences of a “no deal” Brexit.

I understand some people actively want us to leave the European Union without any deal and trade on WTO terms but in my view this would create unnecessary risk for thousands of businesses and millions of people across our country. It is much better to find a deal that can pass through Parliament and includes a transition period.

We have currently reached an impasse in Parliament until we have a new Prime Minister in place, which is expected to be announced by the 23 July. Any new Prime Minister will almost certainly go back to the EU to try and renegotiate the terms of the Irish border backstop.

I remain supportive of leaving the EU but with a negotiated deal in place. If this is not possible then the new Government must provide a detailed plan with mitigation for affected industry sectors so we understand fully the implications of leaving to trade on WTO terms.

The word “unprecedented” has defined my time in parliament since being elected in 2017. It is unprecedented for MPs to receive death threats from constituents.

Discussing Brexit, the deal and a possible General Election on Beyond 100 Days

I was sat in my office in Westminster when I heard the news that the prorogation of Parliament has been ruled unlawful, and we will begin sitting again this week. I have been spending the last few weeks split between working extra days in the constituency and continuing my work in Parliament.

The answer to Brexit should lie in this Chamber, but after more than three years of discussion people are beginning to despair of their politicians. Those, like me, who voted to remain have had to compromise. I have now voted three times to leave and I hope I get a fourth opportunity.

On BBC News talking about the Speaker of the House

This week it’s back to school and work for many after a summer break. A time for reflection and a time for new challenges, a changing of the seasons. There are definitely challenges in the political world at the moment.

Over the summer we have seen the new Prime Minister, Boris Johnson, and his new approach to Brexit. It is clear that the current Withdrawal Agreement will not pass through the House of Commons despite the fact that 90% of Conservative MPs voted for the deal including Boris Johnson.